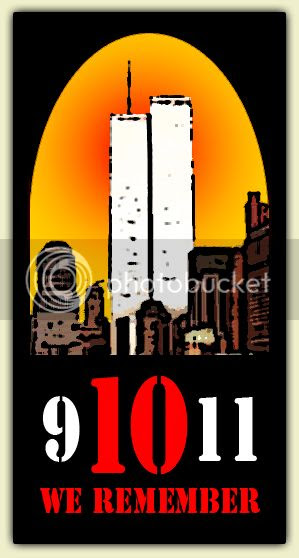 We remember. Original artwork by Elisson.

O beautiful for patriot dream
That sees beyond the years,
Thine alabaster cities gleam,
Undimmed by human tears!
America! America!
God shed His grace on thee,
And crown Thy good with brotherhood
From sea to shining sea!

It has been ten years now, and I still cannot sing the rarely-heard third verse of ”America the Beautiful“ without getting a lump in my throat and tears in my eyes.

I was lucky. I had no friends or family among the victims of the September 11 terror attacks. My loss was that same loss that all of us Americans suffered that terrible day, the loss of innocence. It was a collective failure of our imaginations, that we could not have envisioned terrorists flying hijacked planes - not to distant ports for ransom, but into buildings as jet fuel-laden bombs.

I remember that day. I was in the car on the way to the office when SWMBO called. Turn on the radio, she said - there was something going on in New York. Something involving a plane - was it a Cessna? was it something bigger? I thought - crashing into the World Trade Center. A feeling of nervous dread crept over me. Turning on the radio, the first thing I heard was that a jet airliner had collided with one of the twin towers. Moments later, when a horrified newscaster reported a second plane striking the other tower, that nervous dread became a sickening certainty: We were being attacked. What was next? Moments later, we knew.

We remember the smoke billowing from the doomed towers, papers fluttering down like snow, hopeless people jumping in despair.

We remember the First Responders, the courageous firefighters and police officers who dashed into the buildings in the hopes of rescuing as many as possible.

But I also remember...

...the New York of my younger days, when the Empire State Building ruled Manhattan’s skyline from its perch in Midtown, the gleaming Art Deco spire of the Chrysler Building a silvery second banana. Alas, that is the skyline we see once more, an empty space at the island’s foot where the towers once stood.

...the first time I saw the World Trade Center up close, seeing its sheer massiveness.

...dining in Windows on the World, looking north over the entire island as the setting sun cast a reddish glow over the city.

...business meetings at the World Trade Center, amidst the hustle and bustle of the New York workday.

...countless flights into Newark International, the towers by then a familiar landmark to the east.

I remember the world as it was. It will never again be the same.
Posted by Elisson at 5:20 PM

I watched the buildings burn in my rear view mirror, as the attack occurred while I was on my way to to work. I looked at my calendar watch to note the date, knowing that, from that moment on, everything would be different.

Of all days, daughter happened to be in NYC that day. There were more than a few tense phone messages, each time trying to hide my growing panic.

It was the most terrible of days.

Thank you for a lovely post. It's been a tear-laden day-went to a local remembrance ceremony and watched various programs. I've never been to NYC, but I have. As we all have.