Hakuna is nothing if not perceptive.

Despite our (thus far successful) efforts to keep her apart from Bernadette - Hakuna does not play well with Strange Kitties - we’re sure she has figured out that there is another cat somewhere in the house. Her body language gives her away.

Hakuna’s angst at dealing with fellow felines, however, pales in comparison to her loathing of the annual Veterinarian Visit. As soon as she spots the green Sherpa carrier, she immediately tries to slink away and make herself scarce.

These days I have a couple of advantages. Hakuna, being sixteen years old, is still pretty spry - but she has slowed down somewhat. It’s a lot easier to corner her in our bedroom, because she can’t cram herself under our new bed. And it’s a lot easier to to grab her once she’s cornered. The growling and yowling generally subside after a couple of minutes.

Today, as soon as she saw the Sherpa, she tucked her tail between her legs and slowly crept off to the bathroom, attempting to don her Cloak of Kitty Invisibility as she hid behind the door adjacent to the toilet. It did not work, alas.

Once we got to the vet, things proceeded without incident. ’Kuna may hate that green Sherpa when she sees it at home, but once at the vet, she clings to it like a life raft in heavy seas. And once she is out, she sits quietly on the floor, looking every bit like one of those big-eyed kittens in the Cheesy Black Velvet Paintings whilst making herself as small as possible. 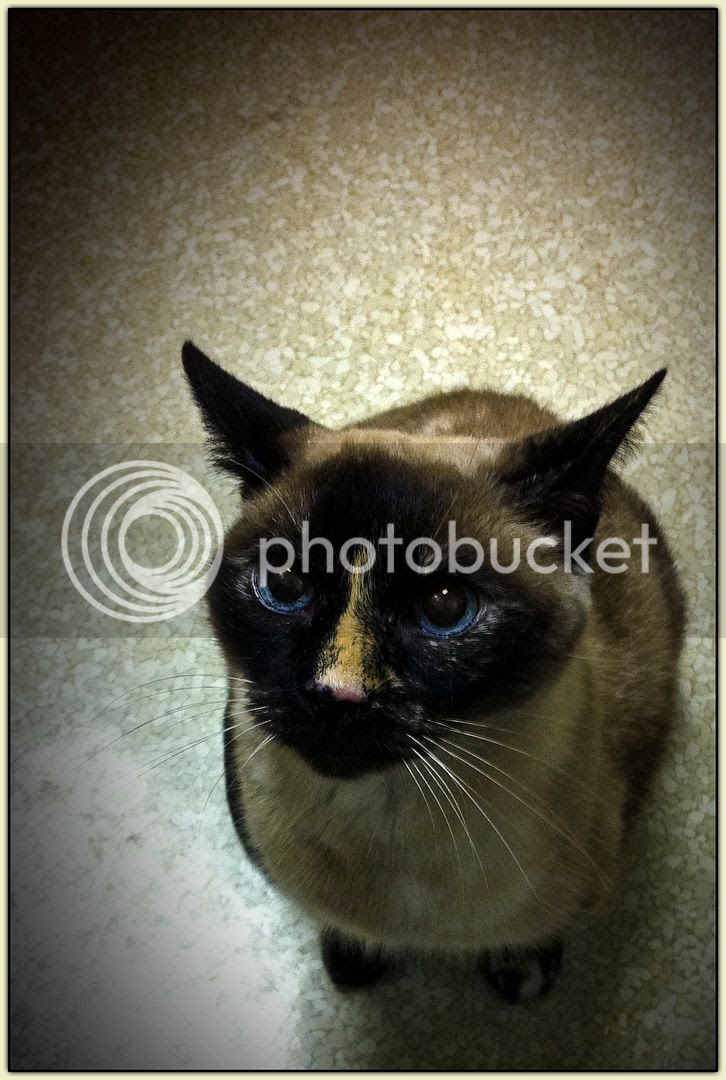 Maybe if I give him the Big Eyes, he won’t give me... The Needle!

What is it with this distaste for the Kitty-Medico? Do the sounds, smells, and surroundings bring back unpleasant memories of early kittenhood? Does she recall being poked, prodded, having blood drawn, getting injections, and having a thermometer jammed up her ass from the last visit? I can certainly empathize, being no fan of the annual physical myself.

Or are her concerns more... sinister?

Has Hakuna heard the legends - legends communicated quietly in the dead of night between Household Beasts, much as human children might tell ghost stories around a campfire - legends about a place where cats and dogs go to get The Needle? Is she thinking about Matata, who one day went to the vet and never came back?

Is she worried that we’re going to kick her to the curb, throw her under the bus, boot her right over the Rainbow Bridge? I can just imagine what she’s thinking:

“Uh oh - the Goofy One brought the Green Thing out. That can only mean one thing: We’re going to the Place of the Little Room with the Metal Table. I hate that stinking place! I hate listening to those damned yappy dogs!

“Oh, crap - he’s closed the door. I’m trapped. Trapped! Maybe if I make myself look real small he won’t see me. No, damn it - here he comes! Ooof-ah!

“Shit. I just thought of something. That other cat! I know she’s in this house somewhere! Maybe she’s my replacement... and today’s the day they’re gonna give me The Needle! I am so screwed!”

Don’t worry, little Hakuna. Bernadette is simply a guest, not a potential replacement sent here for a trial period. All we’re doing is making sure you’re as healthy as possible so we can enjoy each other’s company as long as possible.

And sorry about that thermometer up the ass. It’s just business.

Vet visits are no fun. Please pet Hakuna for me... and Bernadette, too.

My Critter cat once sliced a line down the entirety of my vet's nose. He STILL has the scar. Ummm...oops...sorry! So they put warning stickers all over her chart: Will Bite!!! Will claw!!!

During that unfortunate visit, they had to take her into the back room to finish the exam (so they could get another person to restrain her). I started to hear this tremendous yowling and screeching...horrible powerful sounds.

So I ask one of the attendants, "Is that MY cat making those sounds?" When I was told that it was, I started to get all teary and freaked out. What are they doing to her?!? They replied: "Clipping her nails..."for our own safety!"

Luckily, I rarely have to take her to the vet. They REALLY don't like to see us coming. (But she's a little angel at home...really!)

Perhaps you'd like to adopt one of "My" cats? At home he hates everyone and everything with the heat and passion of a thousand exploding suns. Even our pitbull won't deal with him. At the vet he's sweetness incarnate, his purrs can be heard over a full gale and the rubbing, I've never seen such unholy, brazen rubbing. I think the lying little bastige is trying to get me thrown in the Crossbar Hilton for animal abuse. I don't know whether to starve him to death or feed him so much he ultimately won't be able to move.

What I find amusing? Every time you take her out of the house, she gets a thermometer jammed up her tush... Is this where she thinks you go every time you leave?
She must be appalled for you.

Smartest thing I ever did was build a bed the cats can't get under.

Loving the picture of that big eyed sweetie-pie!

Q: What's the difference between an ordinary thermometer and a rectal thermometer?