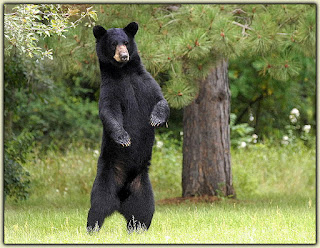 “Did someone just try to poke me? I hate it when someone pokes me.”

Black bear growling in the dead of night
Eat a moose in one big honkin’ bite
O, the fright
You are always prowling in the middle of the night

Black bear growling in the dead of night
Take my pen, but you can’t learn to write
Yeah, that’s right
Stick to what you know and take a great big honkin’ bite 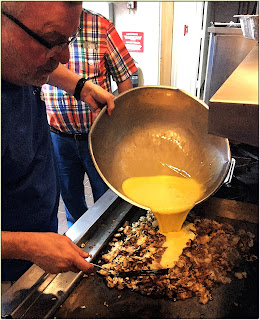 Houston Steve prepares a whole mess of matzoh brei on the flat top.

But hark! A sound is stealing on my ear—
A soft and silvery sound—I know it well
Its tinkling tells me that a time is near
Precious to me—It is the Breakfast Bell.
O, blessèd Bell! Thou bringest Matzoh Brei,
Thou bringest good things more than tongue can tell:
Seared is, of course, my heart—but unsubdued
Is, and shall be, my appetite for food.

I go. Untaught and feeble is my pen:
But on one statement I may safely venture:
That few of our most highly gifted men
Have more appreciation for the trencher.
I go. One plate of Matzoh Brei and then
A recitation from my food-stained bentcher;
That, shulward-going, I may safely say,
“Kein ayin hora, I have dined today.”

We’re three days into Passover, a festival that runs for eight days here in the Diaspora. (It’s only seven days long in Israel, for reasons that I will not waste your time explaining right now. If you’re that curious, drop me a comment.)

The salient feature of Passover is its especially stringent dietary laws. Jews are forbidden to eat anything containing leaven - fermented or fermentable products of wheat, spelt, rye, oats, or barley. Those grains may only be consumed in the form of matzoh, a cracker-like concoction made with the addition of water only, and which must be baked within eighteen minutes of being moistened lest the tiniest trace of fermentation occur.

One is only obligated to eat matzoh twice: during the Passover Seder meals on the first two evenings of the holiday. The rest of the time it is optional. Actually, though, matzoh isn’t too bad. It is crisp and tasty in its own way, and it’s an excellent butter conveyance device. I don’t go out of my way to consume it during the rest of the year, but I enjoy it for the duration of the Festival of Unleavened Bread despite its legendary constipating effects. (Pro tip: eat plenty of fruit compote or prunes.)

A popular breakfast dish that makes excellent use of matzoh is matzoh brei. (That’s “brei,” which rhymes with “fry.” People who spell it “matzoh brie” have forgotten their English phonics lessons.) Think of it as French toast with matzoh in lieu of bread... or, as the French might say, pain perdu dans le désert pendant quarante ans. It’s versatile, as it can be served up sweet or savory as one wishes.

This morning I cooked up some MB, a dish for which there are as many recipes as there are Jewish grandmothers... and this is how I did it:

Take a couple of boards of matzoh, Over a bowl, crumble those bad boys up into nice little shards. Big chunks, little bits, your choice. Feeling lazy? Use matzoh farfel, which has already been crumbled for you. Pour over it a little boiling water and let it sit for a few minutes to soften up. Let cool. If you’ve overdone it with the hot water, squeeze the excess out.

Drop in a couple of eggs. I used one egg per matzoh-board, but you can adjust this based on how eggy you like your matzoh brei. Mix well, add salt and pepper, and then drop it into a preheated skillet that has been greased up with a little butter, ghee, olive oil, whatever. Scramble it or cook it pancake-style - however you like it. (This ain’t Julia Child, you know.) When it starts to get nice and brown, you are good to go. Serve it forth.

I like my brei savory, so I jack up the salt and pepper content. You can add a dollop of sour cream, or you can take the sweet route with sugar, jam, or syrup.

THE RITE OF SPRING

When Igor Stravinsky wrote The Rite of Spring, he was doubtless not thinking about the Passover festival, but our seasonal holiday - our Rite of Spring - creates its own musical masterpiece every year, in smell instead of sound.

I’m upstairs while Dee is beginning the lengthy labor of preparing for our Passover Seder tomorrow. There’s a humongous slab of beef brisket in the oven braising merrily away, while a massive skillet of matzoh farfel with onions and mushrooms adds to the symphony of cooking aromas.

They’re the aromas of the season... the distinctive (and beloved) Pongs o’Pesach.

Soon we will introduce other aromatic grace notes. The sweet medley of fruit compote as it simmers. The apple, cinnamon, and wine of the charoset. The sprightly fragrance of asparagus, the vegetable that - more than almost any other - connotes springtime.

The lower register of our symphony will be composed of the deep, mellow aroma of onions caramelizing in goose schmaltz, a key ingredient in the chopped liver I’ll be making later this evening.

There’ll be other additions to the program. Dee has already prepared the gefilte fish, which will (when served) provide the overture to the festive meal, with its sting of horseradish. Houston Steve has a vat of chicken soup (with caramelized onion matzoh balls) that will likely require a tanker truck to transport it here. And there will be a mountain of sweet stuff as well, provided by our friend Debbie.

I’ve heard variations of this symphony all my life... and I look forward to it every year.

Regardless of your religious or family traditions, this time of year is one that is filled with taste memories. Why not share yours in the Comments?

The Momma d’Elisson of blessèd memory, in her college yearbook photo.

We Red Sea Pedestrians are a strange lot.

Birthdays don’t matter all that much to us.  Sure, we celebrate ’em... but that’s a secular activity that is driven mainly by our participation in the American popular culture.  There’s no religious observance that attaches to birthdays, save for the recognition of a child as a Bar or Bat Mitzvah at the age of thirteen (for boys, and as early as twelve for girls).

We pay more attention to the date on which a person moves on to Olam ha-Ba, the World to Come.

The anniversary of a person’s death - the Yahrzeit - is observed by the people who mourned that person in life, a permanent ritual of remembrance.  Traditionally, one lights a candle that burns for a full twenty-four hours. It is also customary to attend services so that one may, in the presence of the required quorum of ten worshipers, recite the Mourner’s Kaddish, a prayer which, despite its name, is not an expression of grief but rather a call-and-response expression of praise.

It was explained to me once that birthdays are less meaningful than Yahrzeits because a person is, at birth, a mass of unrealized potential.  Upon his or her passing, however, that person has (it is to be hoped) affected other lives and brought some measurable change to the world.  He or she is, at least to the extent possible, has become a sort of Known Quantity.  You can take that explanation or leave it, but it does - at least, to me - make some sense.

If you translated Yahrzeit literally, you’d get “year-time” - anniversary.  But the term has a further implication, that of “season,” rendered Jahreszeit in German.  It’s not just that a year has passed; it’s that a particular time of year connects us to our long-gone loved ones in a unique, powerful way.

With my mother, that season is the springtime, the days leading up to the Passover holiday.  It’s a time when the days get longer and warmer, when trees are in bloom, when the yellow blossoms of forsythia (one of her favorites) paint the neighborhood.  (Yes, I know we throw a memorial dinner for her every year on the first night of Chanukah, but there’s another story behind that peculiar observance.)

I suspect that this time of year, she would have mostly been thinking, “Golf Season is here!”  She was, after all, an inveterate golfer, playing two or more times a week at a time when most of the neighborhood’s housewives were deciding whether to fix a meatloaf or hot dogs for the family supper, or what kind of pie to bring to the school’s bake sale. Always athletic, she also played tennis and bowled, covering both the white-collar and blue-collar sides of the sports spectrum.

We can only speculate upon what she would have been like in her Golden Years, had she lived to enjoy them.  Would she have slowly grown cranky and obstreperous like her own mother had done, or would she have continued to be the fun-loving Doting Grandma to her beloved granddaughters?  We can only wonder... but I like to think that she would have avoided the trap of Excessive Cantakerousness.

Tomorrow is Mom’s twenty-ninth Yahrzeit.  For almost three decades now, she has been playing her heavenly Golf Game from the side of the fairway where the pointy part of the tee goes, and we who have been left behind to mourn her have had to do without her warmth, humor, and common sense.

This evening I’ll light that candle, and I’ll be at shul tomorrow to say Kaddish.  Perhaps I will toast her memory with a perfect Rob Roy - her favorite cocktail - and ponder the bittersweet realization that I have even now walked the Earth over four years longer than she had the opportunity to do.  Alas.