With Passover approaching, I’m already anticipating a week of matzoh-driven constipation and carb-loading.

Part of the joy of the season - and the frustration, as well - is the array of special pesahdik (Passover-style) dishes we consume during the eight days of the festival. They’re special because many of them are eaten only at this time of year. For some of those dishes, it’s just as well.

What we eat is driven by the Passover restrictions on eating leavened foods (chametz), or anything derived from the five fermentable grains mentioned in the Torah: wheat, spelt, barley, rye, and oats. That means things like bread, beer, and whiskey are verboten. (Even though matzoh is made from wheat or spelt, it contains no leavening agents and is baked within eighteen minutes of when the dough is prepared: not enough time for fermentation to occur.)

If we want cake and cookies, they must be prepared from ground-up matzoh, not wheat flour, and they can be leavened only with beaten egg whites. You can buy plenty of packaged Passover cake mixes; I like to call these “Doorstops in a Box.” And while pesahdik breakfast cereals are available, they’re disgusting. Why eat that crap when you can make delicious matzoh-meal pancakes or matzoh brei, the Passover answer to French toast?

It gets even more complicated, though. Eastern European Jews - Ashkenazim - take things a step farther by prohibiting kitniyot: products like corn (maize), rice, lentils, peas, and beans. One rationale is that they can be made into products that resemble chametz (e.g., cornbread or porridge), or that they may easily become contaminated with any of the five grains. But there is also the matter of appearances: if someone were to observe you eating kitniyot, he or she might think you were eating real chametz and conclude that it was OK to do so. And so - dopey as it may be - Ashkenazim do not eat kitniyot during Passover. Sephardic Jews, i.e., those of Iberian or Middle-Eastern origin, do not observe such restrictions, nor do some Ashkenazim who live in Israel.

Living in America, where pretty much everything we eat is derived from corn in one way or another, poses special challenges for people who wish to avoid maize-based products. Fortunately, eating corn-fed beef is permitted during Passover... and I go out of my way to avoid high-fructose corn syrup all year round.

What is considered chametz is pretty straightforward. What is considered kitniyot is open to much more interpretation. For example, what about buckwheat? Buckwheat, while it resembles a grain, is actually neither a cereal (like wheat) nor a grass (like corn); it’s called a pseudocereal by way of emphasizing its difference from true wheat.

You can make leavened dishes from buckwheat despite its lack of gluten. Russian blini, the little yeast-raised pancakes that are a traditional accompaniment to caviar, are an example. Another Russian/Eastern European favorite is kasha, a sort of pilaf made from buckwheat groats. But while some authorities consider buckwheat to be kitniyot, others (including our congregation’s rabbi) say that it is not, and thus may be eaten during Passover. I’ve never seen it, but if my rabbi says kasha is kosher, who am I to argue?

So: Buckwheat is kosher for Passover (ask your rabbi if you’re not sure). Farina, however, is made from wheat and therefore is considered chametz.

Just to help you keep it all straight, here’s a handy reference guide: 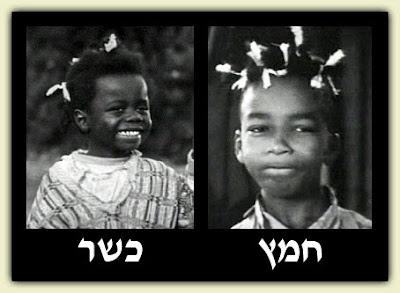 Just out of curiosity, is quinoa kosher for passover? I eat a fair amount of quinoa and quinoa pasta, since it is easier on my blood sugar (I'm Type 2 diabetic), and it actually tastes good.

Even though buckwheat is considered to be kitniyot (and thus not kosher for Passover) by many Ashkenazic rabbinic authorities, quinoa is generally considered to be OK. So the short answer is "yes."