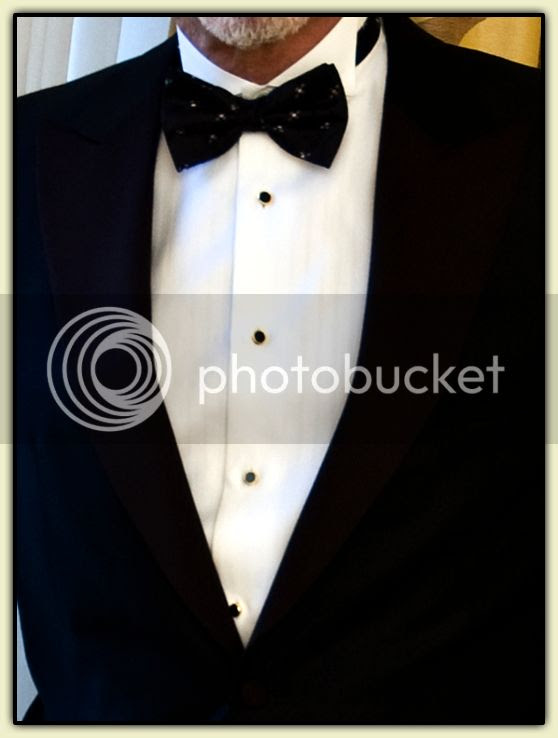 My friend Phreddy was looking at Facebook a couple of days ago and saw a photograph of me wearing a tuxedo. “For why you got on the monkey suit?” he asked.

Monkey suit, indeed. Monkey suit is a venerable slang term for a tuxedo, a term that is also used by some to refer to any uniform. And that makes sense, because a tuxedo - any kind of formal dress, really - is a sort of uniform.

Somewhere in the bowels of Chez Elisson there is a photograph of Yours Truly at my high school Junior Prom, a model of nerdish elegance in my rented white dinner jacket. (It was the custom at our high school, back then, for young men to wear a white dinner jacket to Junior Prom, a “standard” black tuxedo to Senior Prom.) That was, as it surely is for many adolescents even now, my first experience with formalwear.

Technically, Black Tie - a tuxedo or white dinner jacket - is semi-formal dress. (The term “Formal Dress” refers to White Tie, of which more later.) But semi-formal or formal, it was a whole different world compared to the normal “dress-up clothes” with which I was familiar.

A shirt with French cuffs was no big deal, but a pleated-front shirt with studs in lieu of buttons - that was new to me. The trousers with a satin side seam, and the braces to hold them up, also new. Ditto the shiny patent leather shoes and this mysterious contraption called the “cummerbund.” And a bow tie was something I hadn’t worn since grade school.

But somehow, I managed to put the whole thing together, and the effect was (so they tell me) quite dashing as I escorted my diminutive (but well-endowed) prom date around town over the course of the evening. (How dashing a young gentleman can be while being ferried about on his date by his father is a question better left to another occasion.)

Over the years, I had infrequent occasion to wear any sort of formal clothing... and it’s probably just as well. At my wedding, I wore what then seemed wonderfully elegant and today seems completely ridiculous: an off-white tailcoat trimmed with brown lapels, matching trousers with brown side seam, white ruffled (!) shirt, and brown bow tie and cummerbund. Yeef. My only excuse was that it was the 1970’s, a decade packed with sartorial horrors. (At least I never owned a leisure suit.)

As time went on, however, I began to understand that, at least in formalwear, the ephemeral fashions of the day were not the point. Formal clothing is designed to flatter the wearer in a hundred subtle ways, as well as to provide a contrasting background against which a Feminine Companion might better shine in her own finery. Now I favor the more traditional look, a peak-lapel black wool tuxedo jacket with grosgrain silk lapel facing. And when I wear it, I truly feel like Mister Debonair.

If you really want to be Mister Debonair, however, you have to deal with the strict rules of White Tie, the highest order of male civilian attire. Unlike Black Tie, for which there is plenty of leeway for self-expression, there are stylistic forms that must be followed lest one look like a total boob at a state dinner or (extremely) formal wedding. I’ve never dipped my toe into the waters of Full Dress formality, but it would be wonderful to have an excuse to do so at least once in my lifetime. Until then, Black Tie will needs be debonair enough.
Posted by Elisson at 1:45 PM

@Eric - Unlike you, however, I have never worn my tuxedo jacket with a kilt.

And both you and Eric look quite dashing in a tux. Just saying... :)