Spring weather in the Southeast is many things: boring is not one of them. Warm moist air from the Gulf of Mexico is constantly getting into tussles with waves of cold air sliding down from Canada, with violent thunderstorms a frequent outcome.

Friday, our TeeVee Weather Peeps were all in a lather about a circulating cold front that was creating a line of especially nasty weather, a line that was moving inexorably eastward and leaving death and destruction in its wake. Thunderstorms replete with hail and frequent lightning, along with the occasional tornado. The usual seasonal fun.

The first wave of storms hit our area a little after eight o’clock that night, its arrival heralded by our county tornado warning sirens. There’s always an ominous aspect to hearing those sirens, especially when the rain begins to beat down like the proverbial cow pissing on a flat rock and the wind howls, banshee-like, driving sheets of storm-blast down the street in front of the house. But what drove us down to the cellar was the hail, first clacking against the house like so many windblown pebbles, then cascading down in a great roar. 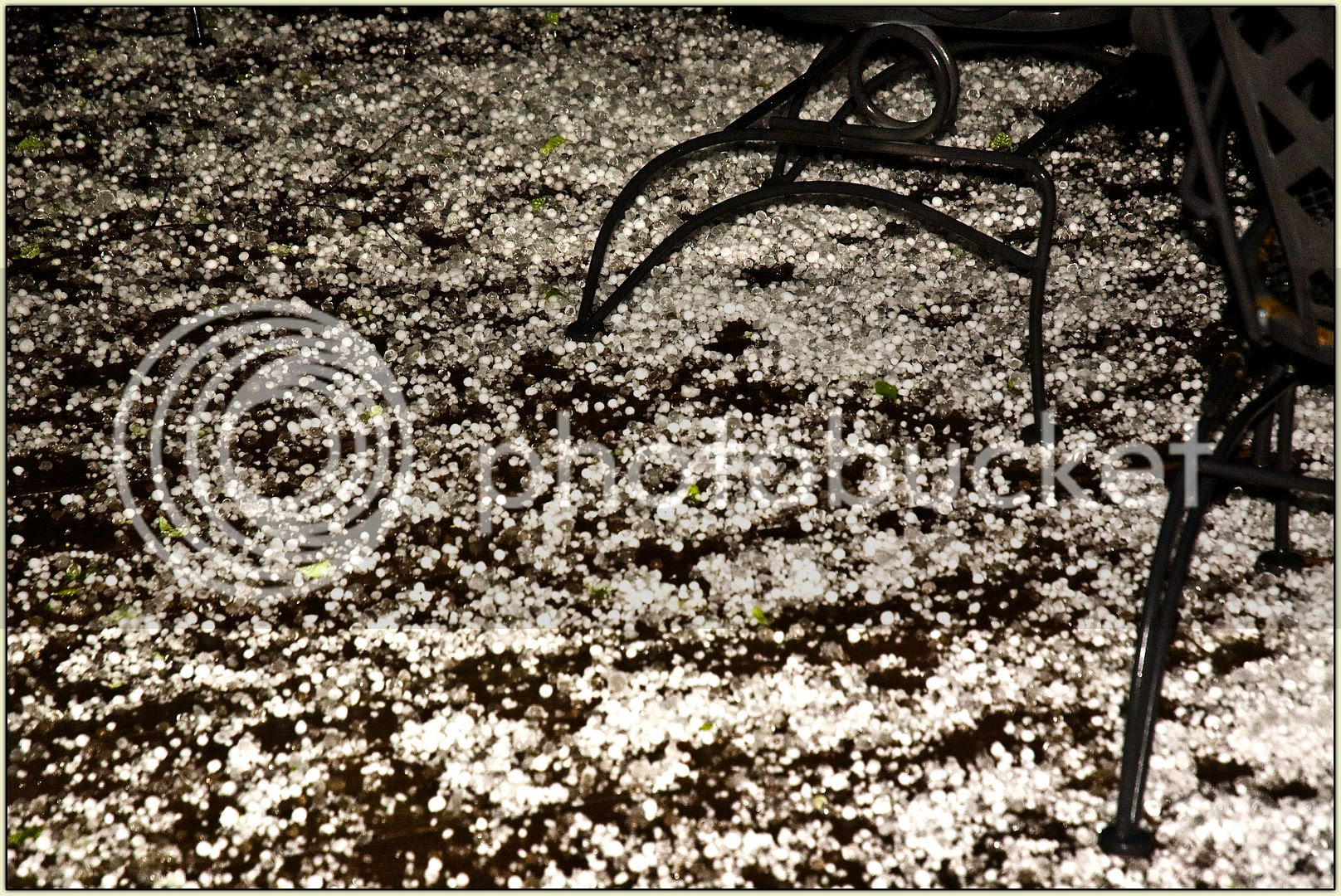 Hail is scary. You never know when the marble-size ice pellets clattering against the windows are suddenly going to be replaced by golf balls or even baseballs, sky-stones capable of wreaking real mayhem.

After things settled down and we emerged from our subterranean protective lair, the evening progressed more-or-less normally... that is, until a second line of severe weather came sliding by at 2:15 a.m. There's nothing that says “Spring is Here!” quite as eloquently as hearing the sirens go off at oh-dark-thirty... and nothing quite as relaxing. Harh. Fortunately, that second line went by without too much sturm und drang, and we were able to go back to sleep.

Saturday morning, we awoke to a driveway and yard littered with leaf-shards. Our azaleas and potted plants were shredded. But they’ll grow back. People whose houses were blown away or whacked by giant falling trees will have a much rougher morning, alas.
Posted by Elisson at 4:10 PM

Back in the day when I lived in Ft. Worth on the East side, we had a storm front blow through during Mayfest...softball sized hailstones fell from the sky. It sounded like gun-shots when those suckers hit the ground. (I was under a bank drive-thru, saving my car). I kept some of those giant hailstones in my freezer for a while.

MW, the Missus and I remember that story. Horrifying!

I was flying on one of my regular business trips on behalf of the Great Corporate Salt Mine shortly after that same storm, and I noticed that the wings had plenty of dings in 'em. Hailstone dings. Apparently, not enough to affect the airworthiness of a modern jet aircraft, but enough to make you marvel at that storm's power.

My missus was born and raised in Seattle. I was raised in So.Dak. One summer we were driving East on I-90 through Moorcroft, WY when a hailstorm hit. I pinched some pretty good holes in the upholstery and SWMBO was calling my manhood into question when we came upon a Divinely placed overpass and pulled under it along with about 1/3d of Moorcroft. My missus and sprogs got a real edumacation about hail watching hard, clear ice balls the size of duck eggs pelting down. The "hail" she was familiar with never came in sizes larger than rice. Every time I hear the Weather Weenies around here (The Puget Sound Basin) squealing like little girls about "OMG, HAIL, WE'RE ALL GONNA DIE!! OMG OMG!!!!1!1!" I wanna slap 'em silly(er). And that, boys and girls, is why I love the Puget Sound area, no serious weather hardly at all. Ever. Thank you kindly, Lord.