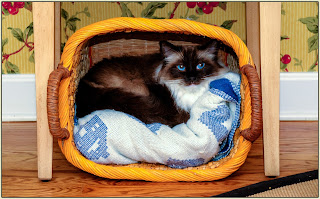 “What the hell are you looking at?”

“Will all great Neptune’s ocean wash this blood
Clean from my hand? No; this my hand will rather
The multitudinous seas incarnadine,
Making the green one red.” - Macbeth (Macbeth, Act II, Scene 2)

Every once in a while, I indulge my love of the Beet-Root.

Whole Paycheck Foods generally offers a fine selection of beets - red, golden, and, occasionally, the pink-and-white chioggia - and it is there that I will pick up a few softball-sized specimens when the Beet-Urge strikes. A softball-sized beet, we should note, is reasonably humongous.

Most often, I will rinse said beet to remove surface dirt, wrap it in aluminum foil, and then roast it at 350ºF for 75-90 minutes. Once it cools enough to be handled, I remove the skin by rubbing it off with paper towels - way easier than using a potato peeler on a raw beet. Then it is a simple matter of hacking the root into large dice and seasoning to taste. (I like to douse beets in sherry vinegar, give them a liberal sprinkle of orange zest and tarragon, a pinch or two of kosher salt and freshly ground black pepper, and then a drizzle of olive oil. Add some goat cheese and/or a few orange segments if you want to get fancy.)

Beets with suprêmes of blood orange, AKA “Murder in the Produce Section.”

As I was skinning one especially large root the other day, I could not help but notice the incredible amount of reddish-purple juice that was schpritzing all over the kitchen. Good Gawd, it resembled nothing so much as a vegan murder scene... and that made me think of The Scottish Play, for it takes a certain amount of obsessive hand-scrubbing à la Lady Macbeth to remove the persistent Beet-Root Stain.

Ahhh, the things I endure to enjoy my tasty treats.

Postscriptum: The following evening, I was reminded about yet another property of the Ruby Root, having been momentarily horrified at the reddish color appearing in the porcelain bowl. “Holy crap!” I thought. “Am I passing another kidney stone?” And then I remembered the beets.

Labels: Comestibobbles and Potaboobles, I've Got a Secretion
Email ThisBlogThis!Share to TwitterShare to FacebookShare to Pinterest

You must pay attention
To your micturition
If a proper life you’d choose:
Everything will be great
If you keep your lines straight
Thus minding your pees and queues.

Labels: I've Got a Secretion, Narrischkeit, Pith and Vinegar, Vile Doggerel
Email ThisBlogThis!Share to TwitterShare to FacebookShare to Pinterest

David Bowie, 1947-2016... a man of many talents. (Note the dilated left eye, a condition with which I have become very familiar in the last five years. Mine is intermittent; his was permanent.)

We were shocked and saddened to hear of David Bowie’s passing yesterday after a protracted struggle with liver cancer. He had just celebrated his sixty-ninth birthday.

Bowie first came to our attention in 1969 with “Space Oddity,” released just prior to the Apollo 11 launch... but it was in his glam-rock persona Ziggy Stardust that he catapulted himself to international pop stardom in the early 1970’s. Over and over again, he would, chameleonlike, reinvent and reinvigorate his music as the decades wore on, simultaneously expanding his career to include outlets for his prodigious acting talents.

Bowie’s output included that rara avis - dance music that I not only could tolerate, but actually liked. It was the soundtrack for the early 1980’s for Dee and me.

His first major hit serves as a fitting epitaph for a unique man.

Ave atque vale, David. You will be sorely missed.

“I’ve seen things you people wouldn't believe. Attack ships on fire off the shoulder of Orion. I watched C-beams glitter in the dark near the Tannhauser gate. All those moments will be lost in time... like tears in rain.” - Roy Batty

If you walk the planet long enough, temporal milestones that were once enshrined in various bits and pieces of pop culture ephemera start showing up in our rear-view mirror.

When I was a young Snot-Nose, a Looney Tunes cartoon short entitled The Old Grey Hare envisioned Bugs Bunny as a grizzled oldster in the year 2000. That seemed awfully far off back then - even 1950 was six years in the future when that film was made - but now it’s a sweet sixteen years in the past.

The Twilight Zone, in its brief fourth-season flirtation with an hour-long format, had an episode that starred Jack Klugman, who parenthetically shared with Burgess Meredith the record for most appearances on that classic anthology show (four). “Death Ship” took place in the far future year of 1997, by which time (the episode’s creators assumed) humans would be exploring distant stars in flying saucer-like spaceships. Oopsie.

2001: A Space Odyssey took place well in the future, at least when it was released in 1968. Now it looks just a bit quaint. No, we’re not building permanent bases on the Moon, and we’re not quite ready to send ships off to the orbits of Jupiter or Saturn, but we have better videophone technology. (Also, no more Pan American and precious little in the way of Howard Johnson’s).

You don’t have to go off trolling in the 1960’s and prior for these sorts of anachronisms. To me, it’s perfectly bizarre that the entire Back to the Future film trilogy now takes place entirely in our past.

Today, however, we’re starting to bump up against some really serious dystopian futurprediktnis. Blade Runner, Ridley Scott’s 1982 film based on Philip K. Dick’s classic novel Do Androids Dream of Electric Sheep? takes place in 2019... just around the temporal corner.

And today is Roy Batty’s birthday.

Roy Batty is the leader of a squad of artificial humans - replicants, in the film’s lingo - who have illegally infiltrated the earth. As such, they are marked for execution (so-called “retirement”), despite their having a built-in shortened lifespan. Batty is played by a young Rutger Hauer, in what is possibly the finest performance of his career.

Blade Runner takes place in a fictional world, but the idea that some of its characters might even now coexist with us is positively chilling. And fascinating.