If there’s a colander, I’ll wear it.
(If I’m feeling generous, I’ll share it.)

On this final day of June,
Check out my snazzy Colander-Spoon!

Tuco has gone on to the Great Shoot-’Em-Up in the Sky: Eli Wallach, the actor who portrayed him in The Good, the Bad, and the Ugly, has died at the age of 98.

Wallach, strangely enough, was one of the first celebrities I actually saw in the flesh. And he had the distinction of sharing my own daddy’s first name, Eli. How could I not like the guy?

Requiescat in pace, Mr. Wallach. Regardless of what Tuco may have said, I hope you never feel the Devil bite your ass.

[Tip o’ th’ Elisson fedora to Velociman for the image.] 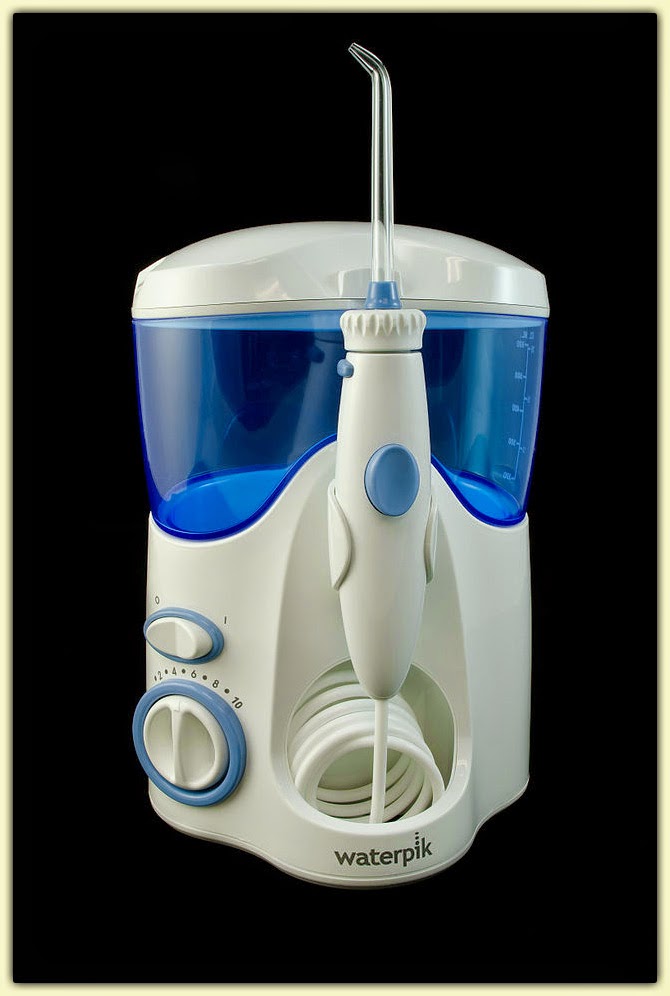 My Waterpik gave up the ghost the other day, announcing its demise in a schpritz of high-pressure water all over my midriff as I was waterflossing my teeth.

This was different from the faux pas of pulling the jet tip out out of one’s mouth while the machine is still running... a good way to get squirted in unexpected places: the eye, the right nostril, the armpit. (Don’t ask me how I know this.) No, I had the jet tip firmly ensconced in my mouth, and yet I was getting an impromptu shower. Fuck! thought I.

Sure enough, a hairline crack had developed in the hose that leads from the pump unit to the handle. It was, typically enough, right below the handle. This wasn’t the first time one of our Waterpiks had cacked in exactly the same way, so it wasn’t so much a surprise as a disappointment.

There was a silver lining in this damp cloud, however. She Who Must Be Obeyed had just been to Costco, where she had spotted Waterpiks on sale. Even better, it was a package deal: a full-size Waterpik along with a companion travel-size version, complete with its own carrying case. Perfect for those out-of-town trips. I had heard about this with only a mild amount of interest, but now, with a dead Pik on our hands, the Costco option was looking mighty attractive.

You don’t own a Waterpik? You should. These handy oral irrigator devices have been around for about fifty years, but not everyone owns one. That’s too bad, because waterflossing is really good for the gums and, in my case, has made a huge difference in the amount of calculus buildup my oral hygienist has to scrape off of my teeth every six months. Alas, being mechanical, they do not last forever... but the occasional need to replace our Pik is, to me, a cost of doing business. Nevertheless, I’d love it if there were some way to replace a cracked hose without having to buy a whole new appliance.

Update: According to commenter Jackie, replacement hoses are available from both Amazon and from the Waterpik website. Sure enough, they are. I’ll keep that in mind next time we blow out a Waterpik hose.

...P.P.S. please if you get a chanse put some flowrs on Algernons grave in the bak yard...

- from Flowers for Algernon, by Daniel Keyes

Daniel Keyes, author of the tragically brilliant short story Flowers for Algernon, died last week at the age of eighty-six.

The story concerns Charly, an intellectually challenged man - in older, less politically correct days, he would have been called “retarded” - who is given an experimental treatment that raises his IQ to genius level. The story’s first tragedy is that his increased intelligence allows him to see that many of the people he regarded as his friends had, instead, been cruel and abusive. The second tragedy is far worse, however: The treatment is a failure because it is not permanent. With enhanced brainpower, Charly sees his future decline, his return to the world of slow-wittedness. It’s heartwrenching.

Keyes expanded his 1959 short story into a novel - not entirely successfully, in my opinion. But Flowers for Algernon has also seen several screen adaptations, notably the 1968 movie Charly, which featured Cliff Robertson in an Academy Award-winning role as the titular character. (I am a bit horrified that there has also been a musical based on the story as well.)

Who is Algernon? you may ask. He’s the mouse upon which the treatment is first tested, with positive results that are encouraging but ultimately all too fleeting: Algernon’s decline allows Charly to see what awaits him as well.

So now, if you get a chanse, please put some flowrs on Daniels grave. Ave atque vale, Mr. Keyes!

This evening the Sommelier Guild returns once again to the Chops Lobster Bar. It’s time for the annual banquet, typically a monument to wretched winey excess.

My attendance at the Guild’s banquets has been hit-or-miss, given that June is usually our Traveling Season. But we’re back from our big summer trip now, and I suppose one more tying-on of the Feed-Bag won’t make too much of a difference in the grand scheme of things.

There will be a host of excellent wines, along with a few of my favorite proteins to accompany them on their voyage down my gullet. Here for your delectation is the evening’s List of Provender:

Update:
So far I have never been disappointed with the food at Chops Lobster Bar, and this dinner was no exception. Only later did it strike me that the one thing missing from the menu was any form of starch... and that was fine with me. No drab, dreary potatoes or pasta to get in the way of the perfectly seared lamb chop, the à point beef filet. The sides, consisting of tiny Brussels sprouts and sautéed mushrooms, were just the right counterpoint to the rich proteins. And the wines? With one exception - the unfortunate 2009 Pegasus Bay Chardonnay, which had a strange, dense flavor - the wines were anywhere from good to excellent. And if twelve wines on the menu were not enough, there were plenty of other bottles being passed around.

Gotta try to make these banquets more often... this one rocked!

These are the hands that raised me. They are my father’s hands.

As a child, I would watch those fingers fly over the valves of his trumpet as his foot would tap out the metronomic beat. He would then sit down at the grand piano and those same fingers would coax beautiful music from hidden strings.

The hands are older now, spotted with age.  But they still make that same beautiful music, and it makes my heart sing with sweet memories.

Postscript: I wrote the above post on Father’s Day of 2010. It is especially noteworthy because it was the first - and only - time my (notoriously technology averse) father ever left a comment on one of my blog posts. Here’s it is:

Eli (hiz own self) said...
It is absolutely amazing but I recognized my own hands immediately! Thank you for the sweet thoughts. It’s good to be a Dad who is appreciated and loved. D.O.D.

For the curious, D.O.D. stands for Dear Old Dad, which is how Eli styled himself in the cards and letters he would send me. He’s gone now, but that beautiful music will always be in my memories.