ENCROACHING PSYCHOSIS, AS INDEXED BY CATS

Once in a while, I’ll see a photograph or a piece of art that causes me to flash back upon a distant memory. I had that experience a week or so ago, when my lovely and talented sister-in-law Rebecca posted some images of her Horsy Artwork.

Just as they say to writers, “Write what you know,” that same advice is likewise appropriate for painters: “Paint what you know.” In Rebecca’s case, that’d be horses. Rebecca, you see, is a horsewoman whose side business is breeding Arabians. It’s only natural, therefore, that many of her Painterly Works feature said Arabians. But there was one in particular that caught my eye...

First, though, a bit of history.

Back in my Snot-Nose Days, my parents were great believers in the scholastic benefits of reading. Not only would they schlep me to the library every week, they stocked the house with Educational Literature.

When I was five years old, they bought a set of encyclopedias. Not Encyclopaedia Brittanica, mind you, but something a little more low-rent: Compton’s Pictured Encyclopedia. Compton’s would later score an historical footnote by being the first outfit to offer a CD-ROM-based multimedia encyclopedia (multipedia?), but what I remember were those twenty-four heavy volumes, all bound in embossed black faux leather. I read them incessantly. 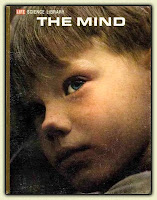 A few years later, Time-Life got into the educational book business by offering several multi-volume “buy as you go” collections. Chief among these were the Life Science Library and the Life Nature Library, both of which caught the attention of my didactically-minded parents. Written for the educated lay reader, they were well illustrated and completely fascinating - at least, in the eyes of a pubescent Elisson. It’s entirely possible that much of my interest in science was catalyzed by my having that pile of Time-Life books to pore over.

One of the Life Science Library books, The Mind, featured a piece on one Louis Wain, an English painter born in the mid-nineteenth century. Wain’s claim to fame was his paintings of cats. Early on in his career, his work was whimsical, with more-or-less realistic cats, often in anthropomorphic poses. Hosting tea parties, strumming a mandolin, playing cricket - that sort of thing.  Innocent stuff.

But then, things began to change.

At about the age of fifty, Wain began exhibiting the symptoms of adult-onset schizophrenia, becoming delusional and paranoid.  And his once naturalistic kitty-paintings began taking an ominous turn.

Wain’s cats started to leer at the viewer, staring ominously, paisley patterns floating in the background.  They seemed to radiate paranoia and fear.

As Wain’s psychosis deepened, his cat paintings became more fragmented and bizarre.  Some crackled with mental electricity... others had the aspect of Indian gods, casting a malevolent gaze.

Eventually, Wain’s cats became all but unrecognizable as cats, devolving into intricate fractal patterns.  If you look hard enough, you can see a kitty in there somewhere, but it takes an effort of imagination.

The story of Louis Wain and the way his paintings mirrored the progressive deterioration of his mind made a strong impression on my pre-adolescent imagination.  The story, of course, turns out to be not quite as simple as the Life Science Library presented it: Despite all those psychedelicats, Wain continued to paint completely naturalistic kitties through his entire career as well. But still... that book provided food for thought.

Fast forward to Rebecca and her artwork.

When I saw this - how do I describe it? - Electric Horsie, I felt a nagging at the back of my mind. Why did it look so familiar?

That’s when it struck me. Louis Wain! The Nutty Kitty Guy! That painting looked like Wain himself could have painted it... probably sometime between the time he started hearing voices in his head but before the onset of full-blown visual hallucinations.

Of course, none of this is meant to imply that Rebecca is ready for the rubber room... just that this one painting struck a chord and triggered an old memory! Hell, even Hakuna sometimes reminds me of a Louis Wain painting...

Long time not see. I was out of circulation for a while, and this new place of yours is quite cool. About the Echo - I am still undecided on relative stinkiness of Echo vs Blogger comment system. Oh well...

O.M.G., Elisson. My mom and dad bought us that set of Time-Life books, too. In addition to the Mind book, I absolutely devoured and obsessed over the WWII book. With the story of the USS Indianapolis -- now forever burned in my memory.

Remember the optical illusions in the Mind book? Me, too.

Should I hide the cutlery?

It's always great to hear that other people have become interested in a subject the same way as you have. I TOO became interested in Louis Wain through that Time Life book on The Mind (great book, I've still got it!)