UNDER THE GUN, AGAIN 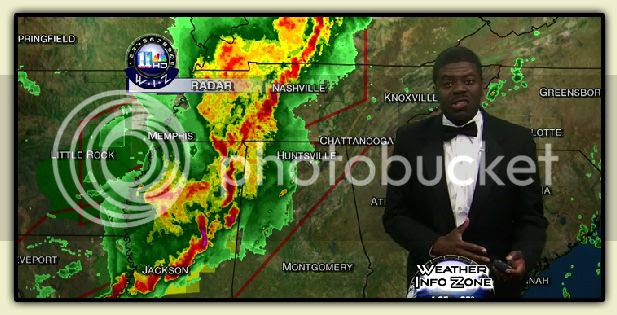 We’re here at Chez Elisson - She Who Must Be Obeyed, the Mistress of Sarcasm, and I - awaiting the arrival of a horrendous line of supercell thunderstorms. What the weather-wonks call a “significant tornado outbreak.”

There’s a monster swath of red and purple on the weather radar map stretching from the Gulf all the way to Toronto. Right now most of it is in Alabama, but it’s continuing its inexorable slide eastward. Toward us.

The weather people on the local teevee stations have been pissing their pants for at least the past day. They’re jacked up with a sweaty combination of fear and nervous excitement. They will have their time in the spotlight, for sure - but any joy they might feel is tamped down by the knowledge that it’s all too likely that people will lose their homes and lives tonight.

Tornadoes have been skipping across Arkansas, Mississippi and Alabama all day. Now it’s our turn to be under the gun. It’s one of the pleasures of springtime in the South.

Assuming our house remains standing through the night, we’re likely to lose our satellite signal. I’m hoping we don’t lose power, too. Generally, our electricity stays on through the worst storms, but tonight, all bets are off.

SWMBO’s main concern, at this point, is whether she’ll miss any of “American Idol.” Grace (and guilty pleasures) under pressure: that’s her.

Update: Eric, up in the wilds of eastern Tennessee, reports that he is without power... and that, for a while, lightning strokes were flashing and banging at a rate of over two per second. Yikes!

Update 2: It’s the morning after what has been reported to be the worst tornado outbreak since 1974, and one of the worst in U.S. history. Over 173 confirmed dead, most of them in Alabama. Eleven deaths in northwest Georgia, in towns I was driving through exactly one week ago.

Over 150 tornado touchdowns were reported throughout the region, including those that were spawned by a single monster supercell that cruised across Mississippi, Alabama, and northwest Georgia over the course of the afternoon and evening, laying waste to Tuscaloosa and Ringgold.

We were lucky, with most of the really bad stuff skirting the edges of the metro Atlanta area. Here in east Cobb county, we saw a few lightning flashes and had a few minor storms blow through, but nothing to set the warning sirens off or send us scurrying to the basement with flashlights in hand. Watching those huge red and magenta blobs on the weather maps, though, we knew other folks were not as fortunate.

Now it’s the East Coast’s turn. Hopefully, the storms have shed most of their energy and will be only shadows of the destructive behemoths that roared through Dixie.

Update 3: After two days, the full magnitude of this weather event is still just beginning to be understood. Over 200 tornadoes were reported within a span of just a few hours, many of them deadly long-track storms.

It’s a good possibility that the twister that took out Tuscaloosa was the most powerful tornado ever recorded in the United States. Aerial views of Tuscaloosa show a swath of devastation that looks like it might have been left by Gawd’s own vacuum cleaner... and the known death toll is over 350 and climbing.

Here in Cobb County, Georgia, we didn’t just dodge a bullet - we dodged a fucking cannonball.
Posted by Elisson at 8:55 PM

Just glad you and the family are OK! Those storms made the papers on my end of the world as well :o

Bad bad storms. We are having a weird cold spell out here in the west. Seems like a February instead of May Day.