NOBODY EXPECTS THIS VENN DIAGRAM

Back when I was in seventh grade, the big thing in education was “The New Math.”

I’m still not sure what-all The New Math entailed, but I remember learning about sets, bases (other than the familiar 10 of our decimal number system), and Gawd knows what else. It was a confusing mess, and my ability to comprehend mathematics got partially derailed... at least, until I got into high school where they taught “The Regular-Ass Math” - algebra, geometry, trigonometry, and calculus. That stuff I could understand.

One of the things we learned in seventh grade set theory was how to show how sets combined and overlapped graphically. The best way to do that is with a Venn diagram, in which individual sets are shown as circles. To show set intersections, these circles may overlap with one or more other circles. Easy-peasy!

Want an example? Courtesy of Big Stupid Tommy (who posted it on his Facebook page), we have this fine example of a seasonally themed Venn diagram, created by one Stephen Wildish. (You can see more of his excellent work at his website, as well as at his redbubble page.) 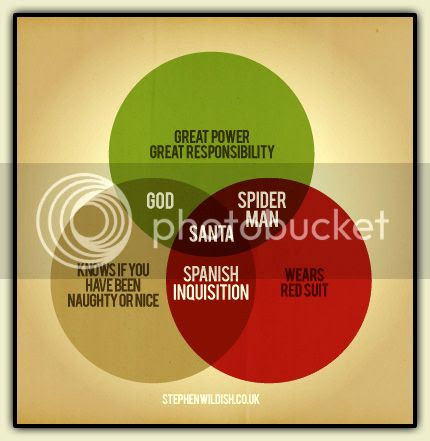 Why, it’s nothing less than the founding document for some sort of religious institution!
Posted by Elisson at 11:43 AM

Labels: Narrischkeit
Email ThisBlogThis!Share to TwitterShare to FacebookShare to Pinterest

Of which the only real member of the intersection sets is - what nobody expects - the spanish inquisition ;-)

"You can't take three from two -- two is less than three -- so you look at the four in the tens place. Now that's really four tens, so you make it three tens, regroup and you change the ten to ten ones and you add 'em to the two and get twelve, and you take away three -- that's nine. OK?"