LIMITS, WE GOT LIMITS 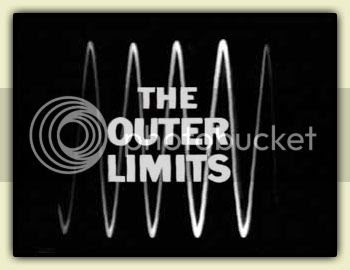 “There is nothing wrong with your television set. Do not attempt to adjust the picture. We are controlling transmission. If we wish to make it louder, we will bring up the volume. If we wish to make it softer, we will tune it to a whisper. We will control the horizontal. We will control the vertical. We can roll the image, make it flutter. We can change the focus to a soft blur or sharpen it to crystal clarity. For the next hour, sit quietly and we will control all that you see and hear. We repeat: there is nothing wrong with your television set. You are about to participate in a great adventure. You are about to experience the awe and mystery which reaches from the inner mind to... The Outer Limits.” – The Control Voice (opening narration)

I recently treated myself to something unusual: I purchased a television show on DVD.

Between the Missus and me, we have a few teevee shows in our DVD and/or Blu-Ray library. We’ve got several years worth of Seinfelds in the cabinet; I have all of the Venture Brothers shows; and somewhere or other I’m pretty sure SWMBO has a few seasons worth of Friends, Golden Girls, and Gawd knows what else. But when I saw that I could get the entire run of The Outer Limits on DVD for not much more than a double sawbuck, I hit the “Add to Cart” button on the Amazon site faster than you could say “There is nothing wrong with your television set.”

I was not quite eleven when The Outer Limits first aired. At the time, I was a big fan of The Twilight Zone, Rod Serling’s brilliant anthology series, which I would watch with emotions alternating between utter fascination and shivery horror. The Zone had it all: fantasy, science fiction, weirdness, aliens, mysteries, and just plain old stories... usually with some kind of twist at the end, either ironic or macabre.

The Outer Limits was something else. It stripped away all of the fluffy shit from the Twilight Zone concept, mostly focusing on science fiction, horror, and bizarre-looking aliens... with unnecessary love stories thrown in most weeks to add sex appeal. As soon as that discordant opening chord sounded and you heard the Control Voice intoning the weekly introductory mantra, you knew you were in for something a bit more...intense. Most of the time, it scared the shit out of me.

With a half-century (thereabouts) of retrospection, I think TZ holds up better as a series... just as it was a better series when it was on. But The Outer Limits was much darker, lacking the sermon-like tone that TZ had all too often, and its best episodes are as good as - or better than - anything offered up by its anthological competitor. Provided, of course, you can overlook the (mostly) amazingly cheesy special effects.

As for the worst OL eps, there are a few of them that are mind-bogglingly stupid... and yet that is part of their charm.

The Outer Limits, much more than The Twilight Zone, relied on the “bear,” a monster of some kind that always had to make some kind of appearance in the first half of the show. (Several of these “bears” ended up being recycled, making appearances on Star Trek in its first incarnation. For that matter several Outer Limits actors, such as William Shatner, Leonard Nimoy, and James Doohan, were similarly recycled.) As defined by co-creator Joseph Stefano, the “bear” was any monstrous creature whose purpose was to “induce wonder or tolerable terror or even merely conversation and argument.” Think of the Mutant (one of Velociman’s icons). Think of the Big-Headed Future-Dude played by David McCallum in his pre-Illya Kuryakin days. Or the dopey giant ants with evil human faces in “The Zanti Misfits.” Them’s your bears. They’d make you piss your pants in terror if you were an impressionable young kid... and even today, a few of them still are able to grip you emotionally, mainly because of the good characterization and storytelling that marked the best Outer Limits shows. 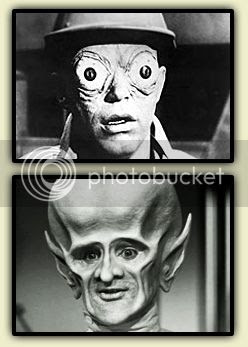 The Mutant (Warren Oates, above); Big-Headed Future Dude (David McCallum, below) - two of the better-known “bears.”

When I was a kid, those shows were in re~runs late at night, on channel 9. I was rarely allowed to stay up late to watch TeeVee, but when those shows were on, my dad went to bed, and my mom and me hunkered down for the duration (the two shows were usually shown back to back).

For some reason, all these years later, I still have some creeped out memory of an episode involving tumbleweeds.

And tumbleweeds are kind of scary in real life too. Sure, they might look light and fluffy, but I hit one once going 80mph...darn near wrecked the car! So now, every time I see tumbleweeds...I get a little creeped out!!!

Ahhh, the tumbleweeds. That'd be the "Cry of Silence" episode with a pre-Green Acres Eddie Albert.

Yeah, I guess there's a whole generation of people who, at some deep level, think tumbleweeds are creepy... and we can all blame The Outer Limits.

The only TV show DVD I have is "Rat Patrol" Worth the price for the opening credits on each episode alone.

A bit O/T, but I think "Have Gun Will Travel" is the only TV series worth its cabinet space. (YMMV)

Watched the tumbleeds with my brother in law in like 1979, when he 12. It still gives him nightmares.

There were episodes of The Twilight Zone and (especially) The Outer Limits that gave me the Shit-Willies back in the day. I can still recall the little tingle of terror that I felt as a kid when I watch certain episodes even today.

Overall, I think OL had more scary stuff... but as for TZ, there are still episodes that The Missus refuses to watch because they traumatized her so much as a kid.

I've been catching up on my OL on HULU, which has been awesome. it has allowed me to see the whole of the two part "the Inheritors" that I had previously only seen one part of.

What I'm most envious of is that you bought the whole series for a double sawbuck. (Modesty prevents me from revealing what I paid originally.)