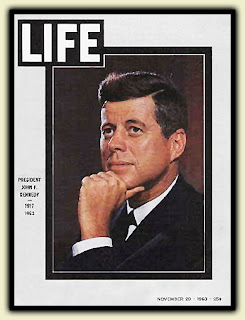 LIFE Magazine, November 29, 1963...a week after JFK’s assassination. I still have a copy tucked away in the Elisson Archive.

To most Americans alive today, Kennedy is a name on a high school, an airport. The face on the (now rarely seen) fifty-cent coin. A photograph in a dusty history book.

But there are those among us for whom Kennedy was more than just an idea: He was a living, breathing man, reduced now to a half-century-old memory.

I was a sixth grader sitting on the school bus that Friday afternoon when I first heard the news, the words passing among us like an electrical discharge. Someone shot the President! Someone shot Kennedy! Most of us didn’t believe it. It had to be a baseless rumor. It was too outrageous, too incomprehensible in its enormity. We rode home, uncharacteristically quiet and numb.

Within my breast, I harbored a guilty secret. Earlier that day, as part of a social studies exercise, we had been looking at old newspapers. One, especially, had caught my attention: a special edition (Extra! Extra! Read all about it!) from Friday, April 13, 1945 - the day after Franklin D. Roosevelt had dropped dead of a stroke in Warm Springs, Georgia. The stark, bold banner headline (“F.D.R. DIES!”) was like a punch to the gut. And I had mused aloud, to no one in particular, “I can’t even imagine seeing a headline that said, ‘JFK DEAD.’” At the time, it had seemed like an idle thought; now, as I sat on the bus, that bizarre premonition sat in my stomach like a lump of lead.

As soon as I got to our house, I ran inside and turned on the radio. By that time, it was being reported that Kennedy had died at Parkland General Hospital in Dallas. What we didn’t know at the time was that taking the President to the hospital had been a formality. There was never a hope of saving him; his head had been blown nearly in half.

It’s hard to explain how bereft most of us felt. No President had been cut down by an assassin’s bullet since McKinley, sixty-two years prior; the very idea that it could happen now bordered on ridiculousness. And yet there it was.

The events of the next few days passed by in a blur. An uneventful (for us) but somber Friday evening and Saturday, most of it spent glued to the television set. Then Sunday morning, while I was at Hebrew school, the incredible: Jack Ruby shooting Kennedy’s alleged assassin Lee Harvey Oswald in the gut, in full view of the television cameras and the press photographers. Good Gawd, what next?

Monday, November 25 was a national day of mourning. School was closed for the day, which allowed us to watch the funeral procession on the teevee. The iconic image of John F. Kennedy Jr., the President’s three-year-old son, saluting his father’s casket stays with me to this day. Later that afternoon, boys being boys and all, we went down to the front lawn of the Thorn estate and launched model rockets. JFK, we rationalized, would have approved.

Kennedy was young - the youngest President ever elected - and he was a superb orator, a dynamic man of both ideas and action. He had blundered badly with the misbegotten Bay of Pigs invasion in 1961 but had managed to extricate us from the Cuban Missile Crisis the year before without leaving most of the habitable world a smoking radioactive plain of glass. He had challenged us to send a man to the Moon and return him safely by the end of the decade. He was the product of a period of prosperity and optimism.

He was not without his faults, was JFK. To call him a horndog would be praising him with faint damn, and he relied altogether too much on the friendly discretion of the media. But then, to an extent that would be astonishing even today, people saw what they wished to see in this young, handsome man-Jack with the elegant Jacqueline at his side.

One can only speculate as to what the nation’s history would have been like had Kennedy not been cut off untimely. The two big issues facing the country then were the Cold War and the growing civil rights struggle, and one can legitimately question whether those issues would have been managed differently under a prolonged Kennedy administration. Would we have gotten even more entangled in Vietnam? Would the Civil Rights Act of 1964 and the Voting Rights Act of 1965 have been pushed through more rapidly or would they have been relegated to Congress’s back burner? And would the later 1960’s have seen a similar spiral of increasing disillusionment and cynicism - the assassinations of Martin Luther King and Robert F. Kennedy, the election of Richard Nixon, the ongoing divisiveness fueled by the Vietnam conflict - had Kennedy lived? 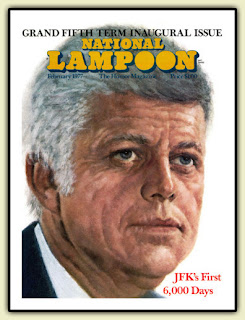 We will, alas, never know.

I am guessing that you and I were sitting on the same school bus, given that we lived in the same neighborhood. I can still remember the principal (what was his name? Mr. Eldard?) of McKenna Junior High coming onto the bus to tell us.

Every generation in life has at least one moment where the world stops and everyone is going "what the hell just happened"? I came along five years too late for the Kennedy assassination, but my two such moments were the Challenger explosion in 1986 (my senior year of high school) and, of course, 9/11.