Back when I was a young engineer in the employ of the Great Corporate Salt Mine, I learned about hydroblasting, a technique that was used to clean out pipes and pressure vessels.  Used properly, it would remove the most stubborn deposits of gunk and crud, leaving pristine, shiny metal surfaces.

When you had a runaway reaction that would fill a hundred-foot-tall reactor with a single, solid 90-ton chunk of polyethylene, you’d open ’er up, send in the guys with chainsaws to cut the mess up into manageable chunks, and then hydroblast that crap out.  When you had pipes that got plugged up with nasty, viscous goo, you would call in the hydroblasters.  They’d clean things right up.

In like manner, the nice folks down at my local ENT specialist - that’s Ear, Nose, and Throat - solved what had started as a minor annoyance that subsequently threatened to become a Major Issue: my progressively worsening hearing on the right side.

There’s no doubt that my auditory abilities are not what they used to be.  Not surprisingly for someone who has been marching around this blue marble for over six decades, I’m starting to get some falloff in my ability to perceive higher frequencies.  It’s not at the point where I need Electronic Assistance, but that is only a matter of time, I fear.

But in the past few weeks, my right ear has been downright dysfunctional.

At first it was reminiscent of a time about five years ago when I flew to and from Sweat City with a full-blown head cold.  It felt as though someone had stuffed my head with cotton wool: The combination of plugged-up Eustachian tubes and the cabin air pressure differentials stopped up my ears for a solid month.

This felt like that, but I had no cold... just that miserable plugged-up feeling.  But since it wasn’t responding to the usual remedies (antihistamines, gum chewing, et alia), She Who Must Be Obeyed suggested that it might be a good idea to actually go see the Ear-Croaker.  After all, who knew whether something more serious might be afoot?

Turns out it was nothing more serious than a good case of Cerumen in Extremis: I had been growing a veritabobble sweet potato farm in that right ear canal.  Fortunately, a short hydroblasting session (with a syringe that looked like it could have given a horse an enema) was sufficient to blow it right out.  Holy crap, I could hear again!

Good Gawd Awmighty, if that hunk of wax wasn’t half the size of my pinky finger... enough to shine a whole bowling alley, it seemed like.  The Missus forbade me to post a photograph of it, and I cannot say I blame her, for it looked every bit as if my ear had taken a dump.  Posting a photograph of that evil goo would have been nekulturny in the extreme.

But I shall leave you with this: 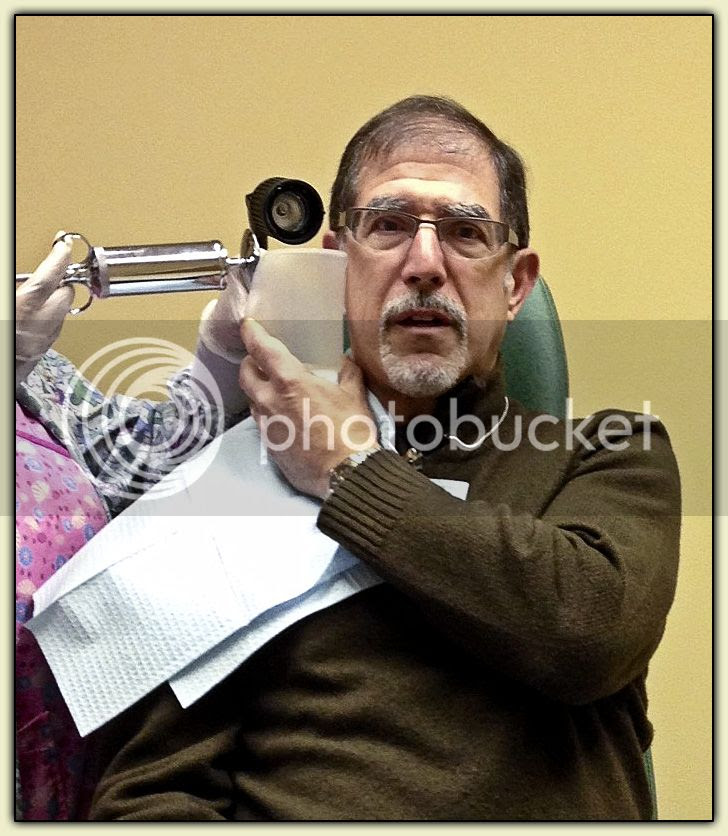 You’re gonna squirt what in where? Get that infernal device away from me!

Labels: I've Got a Secretion
Email ThisBlogThis!Share to TwitterShare to FacebookShare to Pinterest

Why does this remind me of Hamlet? (Although I suppose a wax-plugged King Hamlet would have been impervious to Death Via Ear Canal.)

There are lots of good ear-wax (and other) removing sessions on youtube. But I'll just have to imagine yours. A hundred years ago and you would probably have lost the hearing in your ear.

Been there, done that. Doctor Doctor used the same hydro-blaster on my ear and also produced a formidable ear turd.

I laughed so hard I nearly peed.

I scour with Q tips too much to ever get that big an ear-turd. Yes, I know you aren't supposed to stick them in your ear. Which is stupid, because why do they shape them like that? On the other hand, when I had my ear blood clot

a bobby pin helped break it free, and I have it still in a little glass vial.

Damn, that post was almost to the level of shit blogging. I think the Acidman would have loved this post.

Og, Q-tips are precisely what created my immense Ear-Turd. When you swab your ear canal with a Q-tip, you may remove some of the wax, but what you mostly are doing is jamming wax farther into the ear canal, where it compacts itself against the eardrum. Eventually, if it doesn't loosen spontaneously and fall out, it creates a solid, difficult-to-remove plug.

My ENT guy said to NEVER use Q-tips... and now I believe him.

Doc checks my ears every time. I never have any earwax, though I have gathered enough on the ends of Q tips to make a candle the size- and shape- of the Stanley cup, I imagine. My ent also said "never use Q tips." then he said "How do you keep your ears so clean?"

I DO sometimes rinse with mineral oil. but I have never had earwax buildup of sany kind since I was a kid, and I use Q tips every day.

When she was little-little, my daughter used to get the waxy ear buildup. Her doc cleaned them out the first time, and made sure we (I) could do it. We used an old-fashioned red bulb syringe to blast warm water into her ear canals.

Regularly got match-head sized chunks o' gunk in the out-flow.

Fortunately, she out grew it.

I'm a Q-Tip guy myself, too, and so far no problems.

I occasionally let the shower blast out ("lavage") my ears if they're feeling a bit extra funky. I tilt my head so the spray can go straight into the canal (you hear when it's right).

Have to ask... did the water & gunk squirt out the left ear??