WAY IN THE MIDDLE OF THE AIR 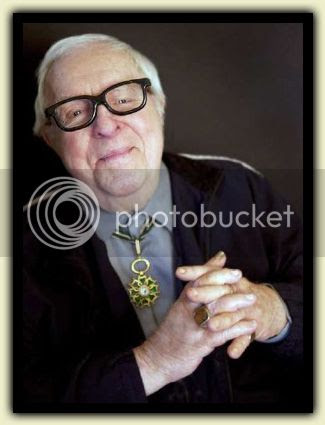 “Something wicked this way comes.” Could it be... the Unexpected Visitor?
Ray Bradbury, SF writer extraordinaire, passed away June 5.

Years ago - my age was still in the single digits - I read a novel about humans traveling to Mars.

It was a peculiar book, not so much a proper novel as a collection of episodic stories, each complete in itself, that combined to create a narrative structure of sorts.  Later I found out that that was indeed the case: it had been constructed of short stories that had been published over the span of several years and subsequently woven together with interstitial segments.  Its author would later describe it as “a book of stories pretending to be a novel.”

It was poetic, packed with imagery.  It was nostalgic.  It was elegiac.  It was marvelous.

It was The Martian Chronicles, and it was my first introduction to the magic pen of Ray Bradbury.

Bradbury, alas, has passed on.  He died yesterday evening at the age of 91, having lived well into the future that he had so eloquently written about.  Of course, it was nothing like he had imagined... at least as set forth in The Martian Chronicles.

Never content to be classified as merely a science fiction writer, Bradbury’s cultural footprint covered books (Fahrenheit 451, The Illustrated Man, Something Wicked This Way Comes, etc., etc.), comics (Al Feldstein adapted many of his stories for EC Comics in their pre-Mad Magazine days), movies (The Beast from 20,000 Fathoms was one of my favorites back in my Snot-Nose Days... and I later found that Bradbury wrote the screenplay for the 1956 version of Moby-Dick), and television (including Twilight Zone, for which he adapted his short story “I Sing the Body Electric”).

Men like Bradbury, Clarke, Heinlein, and Asimov were the giants of SF, and now they belong to the ages.   Others have come and taken their place on the shelves, in the anthologies, in the list of screen credits, and that is as it should be.   But I will never forget the piercing sadness - the utter loneliness - of the final chapters of The Martian Chronicles... and neither will I forget Bradbury, who showed me how a book could elicit such powerful emotions, instilling in me a love of imaginative fiction that continues unto this day.

Ave atque vale, Ray!  Perhaps now that you are Way in the Middle of the Air, you can see what Mars is really like.

I am so deeply saddened. My generation is leaving me...One by one... Not only those extraordinary writers entertained me and opened different universes and ideas, a few of them also taught me directly about the world we're living in, via answers to my many questions.

In the mid-60s, I took it for granted that Arthur C. Clarke, on his way to (then) Sri Lanka, would put a blue airmail note in the post, from the London airport to my address on Georgian Bay, and clarify what culture truly is. "Culture is not how much one knows. But it must include awareness of one's ignorance. Any cultured man must be aware of Beethoven, Ronsard, Einstein, Newton, Godel, Shakespeare, Sibelius etc...even if he doesn't know exactly what they achieved." A.C. continued, "Of course, there are very few cultured men. I've only met a couple in my life."

And what of Asimov's kindness? When I told Isaac that I was reading his Guide to Science to understand my ten-year-old son's new, mysterious language, he sent Martin a card to praise his scientific interest. He added that he was preparing a guide to Shakespeare which would be ready by the time Martin would wish to read the poet. What a boost for a child's ego!

I'm crying now. I miss them so...I still have questions for them, and for J.W Campbell, L. Sprague de Camp, Brian W.Aldiss...And I still need to mail another thank you note to Ray Bradbury.

In case I didn't say it clearly, merci, Mr. Krodman, for your "Shorts in a Wad." I needed laughter badly. It's so hard to survive old age. I didn't think I would make it until your book happened to me. Here, towards my 100 years with the 100-Word Stories. Santé!

Mentioning my dopey little book after dropping the names of literary giants like Asimov and Clarke? Priceless. And, happily ridiculous.

I think Bradbury was the last of the generation of writers that I grew up reading. I miss some of the older writers from the golden age of SF.