I’m a reasonably voracious reader in the base case, but being in the Bloggy Community exposes me to all manner of writing. I’ve seen it all, from people who (as they say) shouldn’t quit their day jobs, to people who have serious writing talent.

Most people who write from a living don’t waste their time writing blogposts - John Birmingham, one of my favorite milskiffy authors, being a notable exception - yet there are plenty of bloggers who would love to be taken seriously as writers. Of those, a minuscule percentage of those probably deserve to be.

One blogger with serious writing talent is the one and only Velociman, whose semiautobiographical freshman effort A Trip of Goats is a seriocomic masterpiece. Tongue in cheek, I sometimes describe it as a sort of Holden Caulfield meets The Three Stooges affair, but that tends to undercut just how good a book I think it is. It would make a great screenplay for a Coen Brothers movie.

Another guy with Writing Chops is Eric, who, until recently, would post regularly at his Straight White Guy site. He hasn’t been writing much there lately, but he is one of a handful of Online Journalists who can turn a phrase in a way that can make me look at familiar things in new ways. I’m hoping he finds his Bloggy Muse again... but in the meantime, he’s in school honing his scribal talents. That’s a good thing.

Not all aspiring writers are bloggers, and that’s OK by me. I’m impressed by anybody who can summon up the sitzfleisch to write a novel, but I am especially in awe of anyone who finds the time to write one despite being burdened with a nine-to-five gig. Which brings me to the point of this blogpost.

S. H. McCord (who, incidentally, is not a blogger) is a full-time classroom teacher, a colleague of SWMBO’s, who has used his personal experiences, memories, and imagination as inspiration for his debut novel The Bones of Boulder Creek. 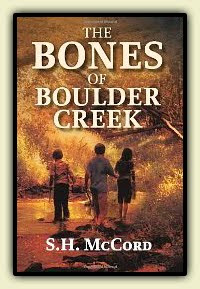 McCord manages to do something few authors are able to do convincingly: get inside the head of a middle-schooler. (Here he has an advantage: He is a middle-school teacher.)

The story is narrated by Chris, who, as so many of us do in middle school, tries to negotiate the tricky waters of these transitional years and carve out his niche in his circle of schoolmates, acquaintances and friends. He wants to be a Cool Guy, but he’s also still a kid, able to experience childlike joy, wonder, fear... and regret. Through his eyes, and the eyes of Nathan, his neighbor and friend, he sees how the adults that control so much of our world can be loving and supportive - or spiteful and misguided.

Nathan is his friend... but not quite. Nathan is weird and geeky, and Chris is reluctant to acknowledge their mutual friendship in the school setting. How many of us have known someone like Nathan - a nerdy sort we’re ashamed to be too closely associated with, the butt of all pranks and the target of bullies, yet blessed with amazing talents and a courageous heart?

And then there’s Hallie Kate, who rides the bus with Chris and Nathan. She loves them both, but unlike Chris, she is unashamed to stand up for Nathan.

The first stirrings of adolescent love. The appreciation of a prodigious talent. Making bad choices and regretting them afterwards. Dealing with pain and loss. Discovering the transcendent beauty of nature. McCord captures all of these and more in an insightful first novel that will make you think about the nature of true friendship... a bittersweet (but mostly sweet) memory of what it was like to be young. It’s pitched at the Young Adult audience, but it’s a book that any adult can enjoy. Go getcha a copy.

And did I mention that McCord wrote all of this despite having a day job? Yes, I did.
Posted by Elisson at 8:34 PM

One day I hope you'll get to add me to the list of bloggers (well, not that I blog very seriously anymore) with a book out. Dare to dream! ;-p