Waldo and Carmen Sandiego have nothing on Edith’s big blue stocking.

Waldo. Remember him? He was that douchenozzle in the round spectacles, wearing a stripèd shirt and matching stocking cap, always lurking in the midst of a crowd in various bizarre places. The kind of guy who gets around despite having no visible means of support. These days, he’d probably be on the terrorist watch lists of twelve different countries just for showing up.

And then there’s Carmen, a five-year-old kid with the travel budget of the entire Belgian parliament and the kind of precocious geographical knowledge that only an autistic savant - or a highly educated dwarf - could muster.

What they have in common is their seemingly miraculous abilities to move from one place to another... like Sean Spicer sensing a truth-molecule in an enclosed space and frantically attempting to dodge it.

Which brings us to Edith’s sock. Stocking. Whatever.

The stocking itself was a long-ago gift from our friends Laura Belle and Donnie Joe. They had gotten our girls a matched set of fuzzy blue Christmas stockings for the express purpose of packing them full of holiday tchotchkes. Blue, of course, because of Chanukah. Both stockings are still in use for their original purpose, but Edith has apparently discovered the one that the Mistress of Sarcasm had buried deep in her bedroom closet.

Stella has never been a cat that evinced any interest in schlepping stuff around. She’s more involved in typical Ragdoll behavior: grooming herself, leaving steamers atop the litter in her box while making no attempt to bury them, looking gorgeous, harfing up the occasional hairball, and napping frequently. For that matter, none of our Kitty-Companions have been schleppers. Stripes, Hakuna, Matata, and Levon were all content to leave stuff where it lay.

Edith is different. Edith moves things around. Edith modifies her world to suit her own desires.

Yesterday evening, for example, the Blue Sock had been downstairs. But as I arose this morning, Edith greeted me with an unusually loud series of miaows. Was she alerting me to Stella’s presence? No, she was informing me that she had delivered unto me a gift: the Blue Sock, which now lay atop our bed, placed neatly in Edith’s sleeping-pad.

By mid-day, it had worked its way to the Mistress of Sarcasm’s room on the other side of the house’s upper level. It’s anyone’s guess how long it will stay there before migrating back downstairs.

We’ve caught her in transporte delicto, so to speak... with the sock hanging from her mouth as she trots from room to room. It’s hysterical. 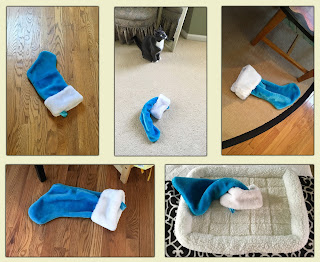 I suppose I can’t complain. Outdoor kitties bring all sorts of presents to their human parents, some not particularly welcome. And as Kitty-Gifts go, I’ll gladly take a migrating sock over the occasional eviscerated mouse or decapitated bird.

Postscriptum: The sock continues its journeys. Bedroom, breakfast room, entry hall... who knows where it will appear next?

Our Critter Cat does that too. She has an array of various toys that she carries around. We think she treats them as if they are her babies. At various times, we find them in her food bowl or water glass, and she'll single out one as a favorite and drag it all over the house. But currently, she has five of them lined up right next to her feeding station. Beyond cute!!'