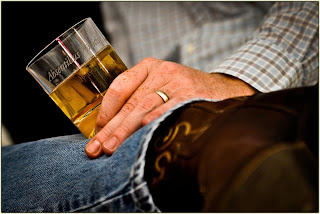 “Hey, I canna taste that whisky - it’s frozen!” [Photo of Eric at his 2010 birthday party courtesy of Erica Sherman.]

The Mistress of Sarcasm - our younger daughter - is a woman with many talents, but the one most people are not aware of is her prodigious ability to detect the subtlest nuances of aroma and flavor. She is a supertaster.

It’s an ability she most likely inherited from her mother, who is also blessed with a remarkably capable palate. Dee can detect certain flavors with the same precision as a 200-inch telescope peering into a field of distant galaxies. Woe be unto the butcher who grinds up a pile of beef hamburger without thoroughly removing all traces of the batch of ground lamb immediately preceding it: Dee can sniff that lamb out at concentrations of mere parts per billion. I’ve seen her do it. Liver, lamb, onion - any of the Foods that Dee Will Not Consume can and will be detected and rejected in minute concentrations that normally require a mass spectrometer to measure.

In this regard, The Mistress is an apple that fell very close to the tree. She could have made a career out of being a cognac or whiskey blender... or a wine expert.

Recently, as I was sipping an Islay malt, she complained that my drink smelled like a Band-Aid™. And it’s not a bad characterization, in its own way. She had managed to sniff out the trace aroma of iodine in my whisky... from several feet away. It was a masterful catch: peaty Islay malts typically have a noticeable iodine pong, probably owing to the amount of seaweed that finds its way into the peat used to dry the malted barley.

I’m telling you - the kid could’ve been a master distiller. Too bad she doesn't drink.

I know the Mistress of Sarcasm does her own thing, but...