I’m not referring to the occasional times that Stella will try to swat Edith... or vice-versa. That happens from time to time, especially if both of them are on our bed simultaneously. Proximity amongst kitties is a bit like a chunk of plutonium: Too much, and it becomes a bit tetchy.

No, I’m talking about the remarkable spirit of caca-cooperation that has manifested itself in recent weeks.

Well, it has to do with the different toilet styles exhibited by Stella and Edith.

I’ve written about this before. Stella will make, at most, a token effort to cover up her, ahhh, by-products, either not trying at all or scratching ineffectually at the edges of her box. Is she merely being prissy (as befits a Ragdoll), or is she just clueless? Ragdolls, after all, are known for weird catbox habits. It’s not that they’re the Irish Setters of the cat world, but the box seems to be the one area where they’re intellectually challenged... and save for the box, Stella is a pretty bright kitty.

Edith, meanwhile, will bury her sculptural works to depths just north of the Mohorovičić discontinuity, which is a mixed blessing: It keeps unwelcome aromas down, but maintaining the box requires the discipline of an archaeologist
or a West Virginia coal miner.

Amazingly, though, the cats have developed what I can only call a Modus Cacarandi.

When Edith hears Stella in the box, she comes running. As Stella finishes up her work, Edith will give her the stink-eye (so to speak) and will inspect the scene after chasing Stella out of the way. If the Cat-Product has not been interred to her satisfaction - which is most of the time - she will promptly jump in and bury it herself. 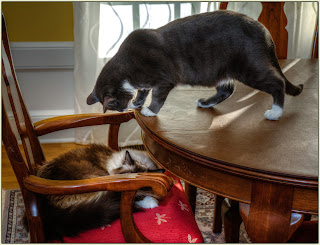 “What the hell is the matter with you?”

It’s pretty amusing to watch - amusing enough to be worth putting up on You-Tube save for the repulsive fact that it involves Kitty-Dookie.

Labels: Cats, I've Got a Secretion
Email ThisBlogThis!Share to TwitterShare to FacebookShare to Pinterest