SHOE STORE OF THE GODS

The first thing you notice when you open the door at Tops for Shoes is the aroma.

It’s an intoxicating pong, consisting mostly of Kiwi shoe polish with a soft undertone of leather. It whispers, “Come on in. We will be selling you a few pairs of shoes today, won’t we?”

Yes. Yes, they will. 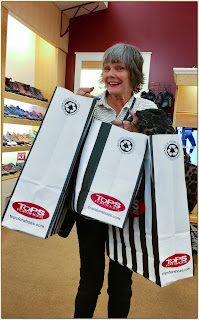 Tops, for those who have never visited Asheville, North Carolina, is an enormous Shoe Emporium. It is not a discount store, simply a shoe store that has grown like a testosterone-laden high-school football player into what may be the largest such enterprise on the eastern seaboard. They claim to serve a six-state area, and I have no trouble whatsoever believing them.

By far, most of the store’s square footage is taken up with merchandise for women. This only makes sense, because on that little extra snippet of X-chromosome that distinguishes ladies from gentlemen there must be a gene that creates an irresistible desire to own as many handbags and pairs of shoes as possible. And thus it is that at Tops for Shoes, roughly two city blocks are completely devoted to women’s footwear... with the mass of the merchandise contained therein actually sufficient to warp spacetime itself, creating a gender-specific gravitational attraction capable of drawing women from a thousand-mile radius right to the beating, bumptious heart of Asheville.

Lest you think Tops is sexist, I should also point out that they are also considerate enough to provide a (closet-sized) space devoted to men’s shoes. I refer to it as the Island of Lost Soles, where husbands and boyfriends congregate while their Significant Others convert any available liquid assets into Pedal Extremity Clothing.

To the store’s credit, the men’s offerings are reasonable in extent and depth, leaning mostly toward hiking models, peppered with the occasional dressy style. And (ahem) they offer my favorite walking shoe, the redoubtable Pikolinos.

In case you are wondering, I ended up getting a pair of those Pikolinos. It was the least I could do, considering the enormous pile of shooey swag Dee had purchased.

Tops for Shoes is for mortals who aspire to the status of Olympians. Well shod Olympians. It is the Shoe Store of the Gods.

Interesting that a purveyor of coverings for the lowest extremities should be named "Tops."

Yes, there is a certain irony there, n'est-ce pas?