My buddy Irwin the Paintner reached another milestone in the Road o’ Life the other day with his elder son Ari just having announced his engagement.

Making a marriage proposal is way, way more difficult these days than it used to be.  Not only do more and more young people wait until they are well into middle age before taking on the Big Commitment, they want to do it in as splashy a way as possible.  Flash mobs in Las Vegas, banners towed by airplanes over Malibu Beach, that sort of thing.  But Ari did it with just the right amount of style and panache.

He took Rachel, his intended, to the local ice cream parlor, where she would have normally ordered a scoop of her preferred flavor, salted caramel.  But wait - there was a new flavor all set to come out the next day, a salted caramel ice cream jazzed up with peanut butter, pretzels, and chocolate chips... amazingly, all favorites of hers.  Would she like to be the first to try it?  Well, why the hell not?

Seeing her delight, the scoopjack suggested that perhaps instead of waiting until the following day, they might as well let the new flavor make its official debut a day early.  Would Rachel do the honors and uncover the blackboard with the ice cream flavor menu?  Again - why the hell not? 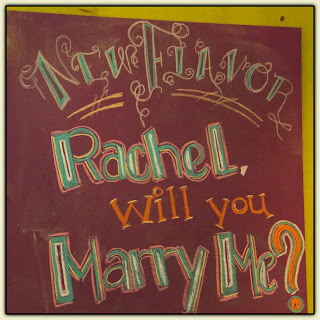 Turns out Ari had made a few little arrangements in advance: The new flavor was called “Rachel, Will You Marry Me?”  Just to make sure the message got across, Ari dropped to one knee and made the Official Pitch... which was happily accepted.

Of course, all of this is quite familiar to me, because I’ve been there.  In fact, it was a little over thirty-five years ago that I made my own pitch to She Who Must Be Obeyed, the woman who would become The Missus... and it was in a manner remarkably similar to that employed by Ari.

We were living in Houston at the time, in a time when places to get a good delicatessen-style meal were thin on the ground.  In those days, if you wanted a good corned beef or pastrami sandwich, the only place you could get it was at Alfred’s, where a panoply of deli items was offered, each named after a local celebrity.

Ahh, Alfred’s of Houston, of blessèd memory.  In the days before I met SWMBO, I would take my Sunday breakfast there, ordering a bagel with lox.  In true Alfred’s style, they would not merely apply a schmear of cream cheese to the bagel: They would unwrap a four-ounce brick of Philly and just drop it right on top of that bad boy.  Good Gawd.

One Saturday evening, I inveigled SWMBO into joining me for dinner at Alfred’s, having made arrangements in advance with the management.  I coolly suggested that she try a new sandwich - so new, it hadn’t even made it to the menu yet.  With my assurances that it contained no dark meat chicken, duck, lamb, tongue, liver, rosemary, or thyme, she bravely ordered the Mystery Sandwich.

That’s when the owner came out and announced the name of the new item: the “I Love Elisson’s Meat” sandwich.  I dropped to one knee...

...and SWMBO slugged me right in the left eye.

But she married me anyway... mainly because I just made all this shit up.  Except, of course, the part about Ari, to whom we send our heartiest “Mazel Tov!”

Great story! The made up one was nice too. :)