THE BEAR AND THE DRAGON 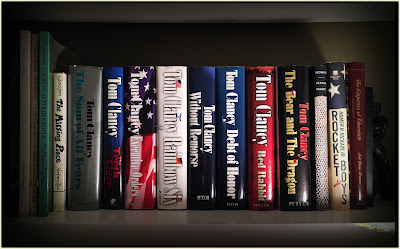 The Clancy Shelf... a small niche within the Elisson Library.

Back around the turn of the century, Tom Clancy came out with a novel titled The Bear and the Dragon. Now, sixteen years after having read it, I am a bit fuzzy on the specifics of the story except for remembering that it involved the intrepid Jack Ryan as well as Russia (the Bear) and China (the Dragon).

I’ve written about The Bear before... the mysterious lancinating pain that had become my all-too-frequent visitor over the past several months. I had figured out that The Bear was a manifestation of trigeminal neuralgia, and my neurologist agreed with my self-diagnosis. Happily, I have been successful at chasing The Bear away (or at least quieting him down) with the right kind of medication.

But now I have The Dragon to deal with, too.

Most people get the occasional floaters - spots in the field of vision caused by debris in the eye’s vitreous humor (the clear jelly that fills the part of the eyeball behind the lens capsule). Floaters are usually no big deal, unless they’re really huge... in which case more serious problems may be lurking. Yesterday I suddenly noticed a massive new floater in my right eye, one that bore a striking resemblance to - you guessed it - a dragon. Knowing that a floater that size can be accompanied by retinal detachment, I called my ophthalmologist first thing this morning. (Anything involving the retina is really scary business... nothing to screw around with.)

After my Op-Doc gave me a thorough lookover, I am happy to report that my retina is fine. So far. But I have a vitreous detachment, apparently a fairly common condition in people who are, ahhh, of mature years.

Well, fuck. I am now officially an Old Guy.

The Eyeball Croaker tells me that The Dragon will be a long-term companion: Vitreous detachments do not resolve themselves spontaneously. They tend to shrink and even vanish in time, but that is simply the result of the brain training itself to ignore them. Already I see hopeful signs, with Mr. Floaty looking less like a dragon and more like a tarantula... or a wad of hair, or a fly on my glasses, or a dark booger. I suppose I will have to learn to live with him.

I envision a Kim Stanley Robinson - Tom Clancy mash-up, one that will describe the remainder of my days on Earth: The Years of Bear and Dragon. Feh.

My sympathies. When I first read the word "floater," though, you can imagine what I originally thought was cruising around inside your eye like the world's most (ob)noxious submarine.

Glad to see you've got a copy of 'Rocket Boys'. That's a wonderful book. Much better than The Bore & The Drag-On...