...to boldly go where no man has gone before. 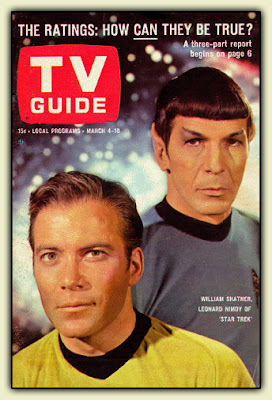 By the time this issue of TV Guide came out, Star Trek had already established itself as a hit... and Leonard Nimoy’s Mister Spock as an unlikely sex symbol.

Yes, I watched that very first “preview week” episode on September 8, 1966 on our dinky little black-and-white television set. “The Man Trap,” it was titled, cleverly playing on both the allure of old girlfriends and the lethal salt-sucking alien featured in the episode.

I can remember the first time I saw that iconic image of the USS Enterprise swooshing across the screen (never mind that space is silent). The introduction! The theme music, high-pitched and eerie (to be toned down in later episodes)! This was gonna be great!

Star Trek, as it turned out, was great - very different from its space-oriented predecessor, the disappointing and hokey Lost in Space. It actually had SF elements in it, leavened by short-skirted female officers and romantic subplots. Star Trek was something new. Something special.

Of course, we hadn’t yet heard about Gene Roddenberry’s one-line network pitch: “Wagon Train to the Stars.” Nevertheless, the suits bought it... and despite the cheap sets and special effects, there was enough of that something special to keep us watching it, even though the first season was the only really good one. Transporters! Velour uniforms!

William Shatner, the irrepressible, scene-chewing, and ever-horny Captain James Tiberius Kirk, was no doubt shocked to see that Leonard Nimoy’s mysterious, emotionless Mister Spock was the character that had all the teenage girls in a lather. Must’ve been those pointy ears.

Half a century later, it’s a huge franchise. Multiple television series, multiple film series, and yet it is still going strong, thanks to a mysterious chemistry between the characters that, even when seen for the first time through the eyes of a (not quite) fourteen-year-old kid, was instantly recognizable as a hopeful vision of the future.

Star Trek... may you and your spawn live long and prosper!