A VIEW TO THE PAST

In the process of deinventorying and cleaning out the Elisson Basemental Archive ’n’ Miscellaneous Debris Storage Facility, Dee came upon an item I had not seen for almost two decades. I knew it was somewhere, but the “where” had escaped me.

It was a Brumberger 3-D slide viewer, a little contraption that was designed for looking at 3-D transparencies. Made sometime in the early 1950’s, my parents had purchased it some 63-plus years ago. 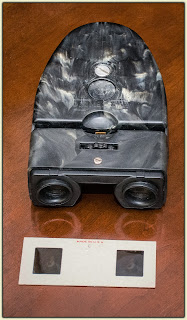 In the box with the viewer were a handful of cardboard slide mounts, each one containing a matched set of two Kodachrome transparencies. You would stick a mount in the viewer, look through the binocular eyepiece, and push a button to illuminate the photo in all its three-dimensional glory.

Imagine the wonderful things you could see in realistic stereovision! The Matterhorn. The Eiffel Tower. The Empire State Building. Pike’s Peak. But no, my parents had bought the device for a much more prosaic application: to look at photos of their baby.

How they got the damned kid to sit still for the photographer, I have no idea. Probably they drugged him. There seem to be two different sets of photos, one earlier, the other taken some months later. In the first set, the kid clutches a blanket while parked on a bed fitted with white sheets.  He does not look happy in many of these pictures, unless you stretch the definition of “happy” to include “mildly bilious.” In the later session, clothed in a fashionable little set of plaid overalls, the little guy looks like he has put on a few ounces and displays a more positive demeanor. Possibly this is because of the various vinyl toys with which he is playing. A giraffe! A fish! A lamb! Look there, is that a smile? Or is he just squeezing out a deuce?

The viewer needed a little reconditioning. The D-size batteries that had once powered it had unleashed a flood of corrosion that had to be cleaned up. Happily, a little work with Mr. Dremel and a pair of needle-nosed pliers and the old Brumberger was right as rain.

As for the pictures, it had been a long time since I had been able to look at them... but there they were, with their familiar stereovision charm. They had held up pretty well for having been about sixty-three years old... better, perhaps, than their subject. And I cannot exactly describe the sensation of looking at little old me in three dimensions. It is a peculiar feeling. 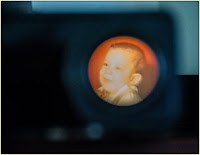 Of course, you’ve already figured out that the photos were of Yours Truly... probably around the time you reached the word “bilious.”