ON THE TRANSMIGRATION OF SOULS

Some of us believe in reincarnation. It’s an attractive enough idea, that of eternal souls transmigrating - being born over and over into this vale of tears and joy - ostensibly for some sort of Higher Purpose.

In early 1997, reincarnation was a critical element of Martin Scorsese’s film Kundun, a biography of sorts of the Dalai Lama. The film’s story begins in 1937, at which time the thirteenth Dalai Lama has been deceased for four years. A group of monks visits a family in a remote part of Tibet. [Is there any part of Tibet that isn’t remote? - E.] After exchanging a few pleasantries, the monks get down to business, taking out an assortment of trivial personal objects and placing them on a mat in front of the family’s two-year-old child, who proceeds to select several of the items and claim them as his own (“Mine!”). They are objects without a scintilla of use to a typical two-year-old, but the child is insistent and, apparently, unerring, for after the final object is identified the monks all bow low and, in complete awe, intone the word Kundun - the Presence. The boy is the fourteenth reincarnation of the Dalai Lama.

I’m not entirely sure about whether reincarnation is something that actually happens, or whether it represents the kind of wishful thinking we humans are all to prone to indulge in, the hope that somehow, some way, our souls are immortal and can outlive us. But I do believe that we can have strong connections to those who no longer walk this earth with us... and by way of evidence, I can offer a story.

The story concerns our friend Houston Steve, his wife Debby (who, alas, passed away last year), and their granddaughter Isla, who, at nearly two years of age, is comparable to the young Dalai Lama in the tale above. Debby spent as much time as possible with her granddaughter while she could, and they developed a considerable bond. But then Debby was gone, with only some photo albums to serve as a direct reminder - aside, of course, from frequent visits with Grandpa.

Then comes this weekend, the weekend immediately before Debby’s Yahrzeit - the anniversary of her passing according to the Hebrew calendar. Isla and her parents are here in town, and, along with Houston Steve, they head to the synagogue.

Isla has never been to synagogue, yet enroute she repeats, “Gamma, gamma” several times. Upon arriving, as she walks through the corridor adjacent to the Holocaust memorial garden, she is inexplicably drawn to it, crying out, “Gamma, gamma!” Daddy opens the door to the garden and the child rushes out, making a beeline directly to the memorial brick inscribed with her Grandma’s name. In her hand she clutches a pebble, and when she reaches the brick, she repeatedly taps the pebble against it.

There are times when, looking at Isla, we all see her genetic heritage: We know exactly whose granddaughter she is. She is almost a Debby in miniature, all the way down to her feisty, unsinkable attitude. She is obviously no revenant, no reincarnation of her beloved Grandma, having been born almost a year too soon. But, short of reincarnation, can there be some sort of mysterious connection between those of use on either side of the Great Divide? An entwining of souls, perhaps? You tell me... but I think I have all the evidence I need. 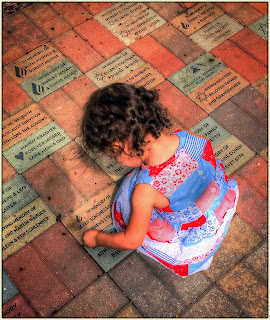 Postscript: Kevin Kim offers a thoughtful examination of transmigration and reincarnation from the perspective of Asian religion, notably Buddhism and Hinduism.