FROM THE ELISSON ARCHIVE

In the process of cleaning out our Basemental Archive of excess inventory, I try to keep in mind that old maxim: “One man’s detritus is another man’s delightus.”

It makes sense, in a certain way. After all, I can’t be the only one to amass huge collections of useless ephemera. Matchbooks. Hotel soap. Shoe mitts. Shoe horns. Airline first-class meal menus. Airline toiletry kits. Hotel stationery. Other people probably pack-rat this stuff too, although I cannot imagine a secondary market for it. Nevertheless, we humans like to collect stuff, a practice that distinguishes us from a handful of animals.

Most of this crap has been given the old heave-ho, but I still have a pile of old TV Guide magazines. I suspect eBay is the best route to get rid of these, but we shall see. For there are little treasures amongst the dross.

F’r instance, the TV Guide pictured in this post? I has it.

And there’s this one: 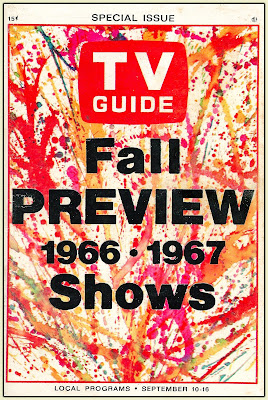 You’re looking at the TV Guide Fall Preview issue for the 1966-67 television season... an issue that is fifty years old this week. Back then, most shows would premiere in September and would run until May or June, when summer re-runs would take over until the next season began. The Fall Preview Issue was where you could learn about all the New Crap that was going to be on the tube (that’d be a cathode-ray tube, the kind of teevee we all had until flatscreens came along) that year. And the 1966-67 season was kinda sorta historic. Take a look at some of the shows that got their start that season:

Family Affair - with Brian Keith as the footloose bachelor saddled with three orphans, and Sebastian Cabot as the English manservant who actually does the heavy lifting.

The Monkees - Mike Nesmith, Peter Tork, David Jones, and Mickey Dolenz star in the adventures of the eponymous band, a half-assed knockoff of The Beatles that somehow manages to come up with some half-decent music.

Star Trek - Perhaps you may have heard of this one. Interestingly, the preview in TV Guide refers to Mr. Spock as a Vulcanian from the planet Vulcanis. At least they got the half-Earthling part right. Today, incidentally, is the fiftieth anniversary of the show’s official premiere: The episode broadcast on September 8, 1966 was a “sneak preview.”

The Jean Arthur Show - Cancelled after only four weeks.

Rat Patrol - based on the adventures of a pack of desert commandos during the WWII North Africa campaign.

Mission Impossible - Before it was a movie starring Tom Cruise, it was this.

It’s About Time - take two dopey astronauts and time-travel their asses to the Stone Age. Hilarity ensues. Starring Joe E. Ross (the “Ooh-ooh” guy from Car 54, Where Are You?) and Imogene Coca, from Your Show of Shows.

That Girl - with Marlo Thomas as an early incarnation of a character that would later resurface on The Mary Tyler Moore Show and Ally McBeal years later.

The Green Hornet - a show that suffered from a lack of good buzz.

Time Tunnel - I had high hopes for this show, which featured a time-travel plot device. But the producer was Irwin Allen, thus guaranteeing suckage on an epic scale.

If you’re old enough to have heard of all these shows, then you’re pretty damned old. What surprises me is how many of them became enduringly embedded in our popular culture (some more enduringly than others). And looking at the listings, you could see all kinds of shows that were still in their first runs. The Munsters! Bonanza!

Now, in the age of 2,000 channels, streaming video, and play-on-demand, the notion of an actual weekly print magazine that told you everything you needed to know about the week’s programs seems rather quaint. If you wanted to watch a show then, you had to park your butt in front of the set when the show was being broadcast... no home recording. No whipping out your smartphone and telling your DVR to snag the latest episode of “Cute Cooks Wearing Cutoffs, Cooking Cookies in a Cookoff” from the Food Network.

Sometimes I miss those days.

Never did like 'Family Affair'. Something vaguely creepy about that show. Probably Satan speaking through Mrs. Beasley...