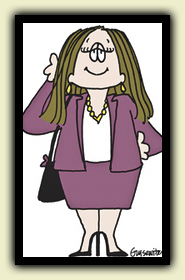 We recently heard the sad news that Cathy A. Hillman, 34, passed away Sunday, October 3, 2010 from complications caused by choking on a chicken bone. Survivors include husband Irving, parents Anne and Bill Andrews, and her beloved dog Electra.

Irving, as of this writing, had declined to talk to reporters. Sources close to the family report that he is disconsolate, having recently heard that he was to be the father of a baby girl. Alas, fatherhood for Irving - at least for now - is not to be.

Cathy was at one time a beloved icon of popular culture, but inside sources report that she knew her career was well past its peak. “Marrying Irving was really the beginning of the end, you know,” said one friend who agreed to speak anonymously. “In fact, the expression ‘marrying Irving’ is now used in comic strips the same way ‘jumping the shark’ is used everywhere else: it’s when things have completely gone down the toilet.”

Bill Andrews, who was present at his daughter’s passing, reported that her last word was, “Ack.”

“At first we thought she was just expressing disgust, horror, or surprise in her usual manner, so nobody realized she had gotten a bone caught in her throat. By the time Irving saw her turning blue, it was already too late.”

Doctors stated that a contributing factor was Ms. Hillman’s lack of a nose.
Posted by Elisson at 4:33 PM

Yes, it was easy to hate Cathy - except for one strip that made me recognize and laugh at myself: Cathy wants to throw out a sweater because it has food stains on it. Her mother objects that it's wasteful to throw it out; instead Cathy should dye it, or sew felt flowers over the stains, or embroider over them, etc. After doing several of these fixes, the mom holds up the sweater and says "Now you can throw it out."