An article in the online edition of the Wall Street Journal the other day caught my eye. “Caught my eye” is an understatement: As soon as I saw the headline, I knew that I would have to read every single word of the piece immediately.

“Americans Eat 554 Million Jack in the Box Tacos a Year, and No One Knows Why.”

I’ve linked the article, of course, because I want you, Esteemed Reader, to go forth and enjoy it yourself. But bear with me as I pick apart some of the insights I gleaned from it.

The Jack in the Box taco is one of the great success stories of American fast food, selling in numbers roughly equivalent to the Big Mac despite there being fewer of JitB outlets versus behemoth McDonald’s. 1,055 tacos a minute. Chew on that statistic for a while. 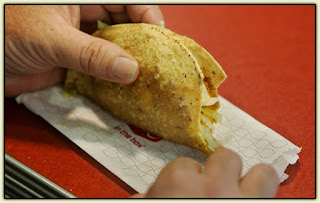 And that is all in spite of the fact that the JitB taco is mostly horrible. It is one of those foods with little socially redeeming value... and yet it is mind-bendingly addictive.

I love the way hard-core aficionados describe the taco. Quoth one Mike Primavera: “The secret to the tacos’ goodness may be the juxtaposition of the ‘soggy, nasty middle’ and the ‘rim of crunchiness on the outside’ that comes from deep-frying the tortilla with the beef filling already inside. One key, he said: “You can’t look at it too long before you eat it. You just kind of have to get it outside of the sleeve and into your mouth.”

My experience with the JitB taco is not by any means recent, given that the last time I had one was probably about forty-five years ago... and yet the WSJ headline rang true with me the moment I saw it. In my recollection, these bad boys were terrible and yet strangely attractive.

In my days at Tiger University, there would be times - almost always very late at night - that we would develop an inexplicable jones for Something To Eat. We were, on such occasions, frequently under the influence of something-or-other, even if that something were simply too many fucking hours in the E-Quad library. We wanted something that was both inexpensive and satisfying, with actual quality being a secondary or tertiary consideration at best. The Jack in the Box taco fit the bill perfectly... especially the inexpensive part, for these babies were (if I recall correctly) available for the now-astounding price of three for a dollar. For that price, we didn’t care that they were probably made of sawdust and ground cat meat.

The only problem was getting to Jack in the Box. The nearest one was in Trenton, a fifteen-mile drive away. This meant (1) walking to the parking lot, which was on the far eastern edge of the campus, (2) driving to Trenton, (3) loading up on tacos, and (4) repeating the whole process in reverse. It was a huge pain in the ass, but we didn’t care. Because tacos!

Those tacos... they were strangely compelling despite their loathsomeness, like the last girl in the bar at closing time. Were they good? Of course not! And yet, they were crunchy. Greasy. There was a nominal amount of shredded lettuce packed into each one, no doubt for moral support. As I said above, we suspected that the filling was compounded from sawdust and cat meat. Some kind of meat, anyway. Perhaps something grown in a lab, or roadkill. Good enough to warrant a thirty-mile round trip in the dead of night.

Labels: Comestibobbles and Potaboobles, Stories
Email ThisBlogThis!Share to TwitterShare to FacebookShare to Pinterest

"these bad boys were terrible and yet strangely attractive"

Rudolph Otto, in his The Idea of the Holy, describes the sacred with the Latin formulation mysterium tremendum et fascinans, i.e., terrifying and compelling mystery.

Just watch out for holy taquerrhea, I guess.