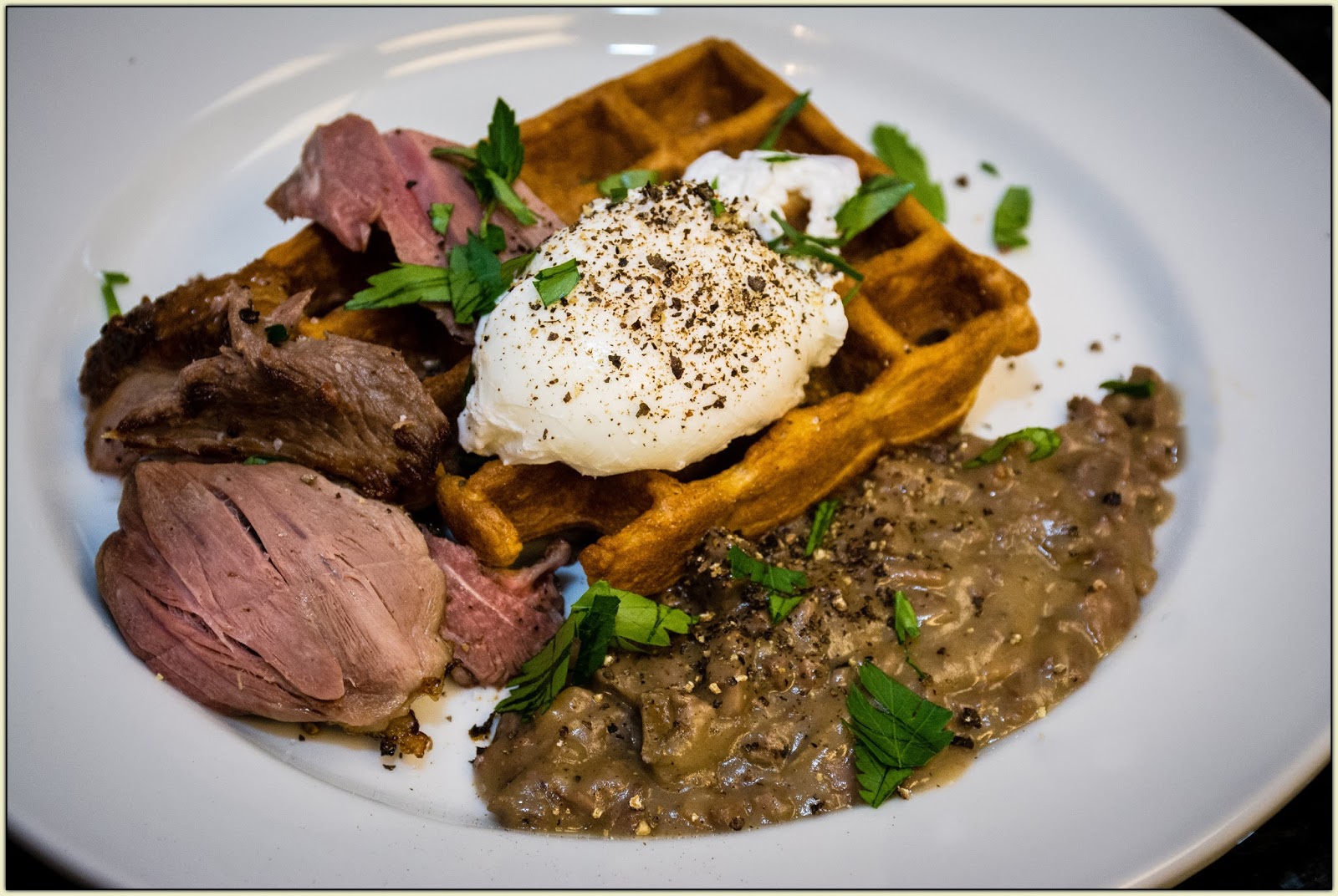 And now, I can happily announce that I’ve had goose & waffles.

Chicken & waffles is a dish with a long Southern pedigree, most notably within the African-American community. (It also, apparently, was also a favorite dish in Pennsylvania Dutch country, owing to its popularity among tourists there.) Typically, it consists of your basic breakfast waffle - think Waffle House - decorated with syrup and butter, served with a few hunks of tasty Southern-fried chicken alongside it. Nice.

A few months ago, I had an upscale version in one of those modern Southern locavore places: duck confit served atop a waffle. Savory and mind-bendingly tasty, it was. (To me, “duck confit” are magic words that will attract me to a menu item like white on rice.)

So much for the backstory.

Yesterday - New Year’s Day - Dee wanted a special breakfast. Pancakes? No, not pancakes. Waffles! (I love making waffles, even though I do it but rarely these days.) And so, the waffle iron was brought forth and waffles were produced in abundance. There were leftovers. What to do?

That is when the proverbial light bulb flashed on above Mister Debonair’s pointy, colander-clad  head. Goose!

Lovely, yummy goose. It’s what duck wants to be when it grows up. It’s what turkeys worship from afar. It’s what the lowly chicken can only aspire to be in the World to Come. Ahhh, goose. Wonderful goose. And having roasted one of these noble fowl only a few days ago, I had tucked away a plastic sack of Goose Remnants in the fridge. It was an easy matter to carve off a few beautiful medium-rare slices from one of the legs, perfect for crisping up in our carbon-steel skillet.

Not only was there goose, there was giblet gravy made from (of course) the bird’s gizzard, heart, neck, and liver, along with stock simmered down from the carcass. And thanks to its surface depressions, AKA Syrup-Traps, a waffle makes an excellent Gravy Conveyance Device. That was what converted what would have been a merely exceptional breakfast dish into one that was Food Network-worthy. Topping the whole affair with a poached egg - the ultimate hipster decoration - didn’t hurt one bit.

Yeah, I ate it. I ate the whole fucking thing. Mister Debonair could do no less.