FLATBREADS? WE GOT ’EM 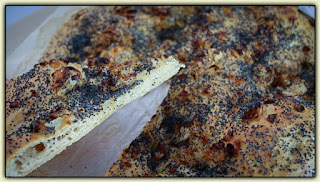 There is a lesser known breadstuff in the Red Sea Pedestrian lexicon, one that is generally unfamiliar to those who have come to know and love products like the bagel.

Ahh, yes, the bagel. It has become a genuine American product, another ethnic food sucked into the great maw of American cultural appropriation. This is not a bad thing, by the way. Cultural appropriation is how our society takes diverse ingredients and melds them together into a whole that is greater than the sum of its parts: not a melting pot, as the old analogy would have it, but a stew pot in which individual ingredients retain their identities, yet work together to create a flavorful result. Think of some of the foods you can now find almost anywhere in America - pizza, spaghetti, falafel, eggrolls, and tacos. And then there’s the bagel, which now is available in places like McDonald’s, where you can purchase one festooned with bacon, egg, and cheese - a combination unthinkable to the people who first brought this unique toroidal treat to our shores.

But, as usual, I digress.

No, not the pretzel. Everyone knows about pretzels, those knotted little suckers available in all sizes and textures: crisp and crunchy or warm and soft (Philly style!), even with all kinds of flavorings and toppings thanks to Auntie Anne’s mall outlets. Not pretzel... pletzel. With an “l.”

The pletzel (also spelled pletz’l or pletsl) is a flattish affair looking something like a Jewish foccacia, generally festooned with dessicated caramelized onions and poppy seeds. It puts me in mind of the bastard child that would result from the union of a pizza and a bialy, one that was subsequently adopted by an Everything Bagel. Pletzels are usually round but not necessarily so, and their degree of both thickness and adornment by toppings varies.

Pletzels are siblings to the bialy, a breadstuff that is, in turn, a cousin to the bagel. To tell them apart, use this handy field identification guide:

1. If it is toroidal (i.e., doughnut-shaped - a ring with a hole in the middle) with a glossy, well browned crisp crust and a chewy interior, it is a bagel.

2. If there is merely a dent instead of a hole and the crust has a lightly browned matte finish, it is a bialy. (The dent is usually filled with caramelized onions and poppy seeds.)

3. If it is flattish, has no hole, and is topped with caramelized onions and poppy seeds, it is a pletzel. (If it is really large, flat, and topped with tomato sauce and cheese, it is a pizza.)

Bialys and pletzels are made from a slightly different dough than a bagel; in addition, they are not boiled before baking. This means they lack a bagel’s hard, glossy crust, which in turn means they need to be eaten while they’re fresh. If you can find a good bagel place that also offers bialys and pletzels, you should give them a try!

Speaking of bialys, the owner of the Local Bagel and Smoked Fish Emporium gave us a behind-the-scenes tour this morning. We got to see the whole works: the huge hundred-year-old dough blender, the new bagel-forming machine, the proofing racks loaded with slowly rising bagels, the enormous walk-in fridge where the bagels are left to rise overnight, the boiling tank, and the oven. But what really caught my eye was the bialy machine, a device that dated from before World War II and that bore an astonishing resemblance to a certain cinematic robot - enough make me wonder whether, at some time long ago in a galaxy far, far away, one of R2-D2’s cousins made a living in a bialy factory on Tatooine.

And it even had a name. Lookee: 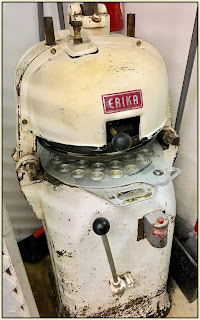