ON THE HALF-SOUR PICKLE AS A SOURCE OF CREATIVE INSPIRATION 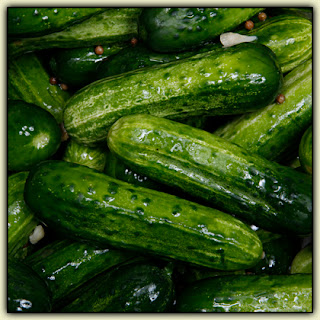 As the servitor took our order, I asked her, “Does that come with a pickle?” She assured me that it did, and I asked her, in turn, to deliver unto me a nice, crisp, bright green half-sour pickle.

For I am a fan of the half-sour pickle. If you are fortunate, you may live in an area where this style of pickle is available - sometimes in jars, sometimes in vats, always refrigerated. The ideal half-sour pickle is bright green, with a pronounced crunch. As half-sours age, their green becomes dull as they soften into the garlicky kosher sour pickles many folks love. But I likes ’em young and crisp.

But this post was not intended to be a disquisition on the half-sour pickle. It’s more an observation on my twisted mind...

...because no sooner had the servitor walked away than I suddenly had an image in my head, a picture of Ebenezer Scrooge from the conclusion of A Christmas Carol, the scene where our repentant and newly Christmas-observant protagonist looks out the window and, seeing a boy on the street below, promptly sends him on an errand to procure an enormous prize-winning turkey, the which to send to miserable, humble Bob Cratchit as an unexpected Christmas gift. Only in my head, it was no turkey. It was an enormous half-sour pickle.

I related this vision to Dee and my daughter, who - almost simultaneously - began to hum the familiar strains to “Entrance of the Gladiators,” a bit of music that you may know as “that dopey circus music you usually hear played on a steam calliope when the clowns rush in.”

Yeah, I know. I’m more than just a little nutty sometimes. (OK, most times.) The Mistress said it best several months ago. During an earlier visit this year, as the three of us were taking a lengthy walk along one of the thoroughfares near the neighborhood, I asked Dee to pose in front of the T-Mobile store.

“Why do you want a picture of me in front of the T-Mobile store?” she asked... a perfectly reasonable question.

“Because I want to caption it “La Donna è T-Mobile.”

Of course Dee refused, but when the Mistress overheard this little exchange, her comment was, “What’s it like in there?” She was referring, of course, to my noggin.

Well, now we know what it looks like in there... but it’s still a bit hard to explain what’s going on in there.

As for that Christmas Carol story - the very thought of which so bemused my wife and daughter - I am happy to present it below. I call it...

“What’s to-day?” cried Scrooge, calling downward to a boy in school clothes, who perhaps had loitered in to look about him.

“Eh?” returned the boy, with all his might of wonder.

“Do you know the Delicatessen, in the next street but one, at the corner?” Scrooge inquired.

“I should hope I did,” replied the lad.

“An intelligent boy!” said Scrooge. “A remarkable boy! Do you know whether they’ve sold the huge half-sour pickle that was in the barrel there - Not those little dill pickles: the big crisp green half-sour?”

“What, the one as big as a certain part of Ron Jeremy?” returned the boy.

“What a delightful boy!” said Scrooge. “It’s a pleasure to talk to him. Yes, my buck.”

The boy was off like a shot. He must have had a steady hand at a trigger who could have got a shot off half so fast.

“I’ll send it to Bob Cratchit’s!” whispered Scrooge, rubbing his hands, and splitting with a laugh. “He shan’t know who sends it. It’s twice the size of Tiny Tim...”

Re: The half-sour pickle: Didja ever wonder "What's the other half?"

"Throw another pickle on the fire before you dot another I, Bob Cratchit!"