THE LONESOME DEATH OF WILLY WONKA 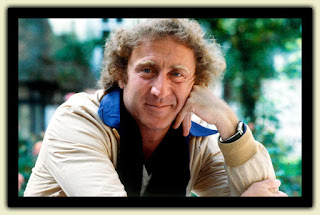 Poor Wonka’s dead
Poor Willy Wonka’s dead
All gather round his coffin now and cry
He had tickets made of gold
And he wasn’t all that old
Oh, why did such a feller have to die?

Poor Wonka’s dead
Poor Willy Wonka’s dead
About to face the awesome, mighty Judge (mighty Judge)
Like a choc’late - in a box
He will sleep ’midst dirt and rocks
But in Heaven he can eat his fill of fudge.

(Apologies to Rodgers and Hammerstein)

Another thread of our pop culture tapestry has come unravelled: Variety reports that actor Gene Wilder passed away today at the age of 83 from complications related to Alzhemer’s disease.

Wilder was a comic genius, with movies such as The Producers, Blazing Saddles, Young Frankenstein, and Stir Crazy to his credit. What stands out in three of these four films is that Wilder is more of a co-star than star, with Zero Mostel, Cleavon Little, and Richard Pryor seemingly taking up most of the screen time... yet without Wilder, those films would have fallen flat. In the fourth - the outstanding Young Frankenstein - Wilder is truly the star, burning with manic energy.

For me - and I suspect, many of my Esteemed Readers as well - Gene Wilder’s defining role was that of Willy Wonka, the mysterious, eponymous candy-producing entrepreneur of Willy Wonka and the Chocolate Factory. Mischievous, impish, sweet, and at times sadistic and even scary, Wilder’s version of Wonka defined the role so thoroughly that even the talents of Johnny Depp couldn’t make a dent in it. I still get a lump in my throat at the end of that movie, despite having seen it at least a dozen times.

As one of my friends has pointed out, a measure of the man is that nobody ever seems to have ever said one bad thing about him... a most unusual and impressive legacy, especially in the acting business.

Perhaps in the next world he will be reunited with one-time wife Gilda Radner, whom he loved deeply. Together, they could make the firmament ring with laughter. But here on Earth, we must shed our tears.

Ave atque vale, Gene! You will be missed.