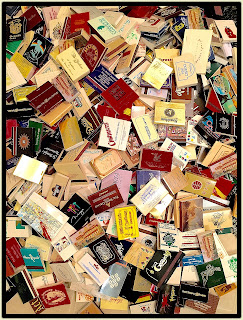 Forty-two years’ worth of matches in one sulfurous pile. Do you recognize any of them?

Whenever the Mistress of Sarcasm comes home, inevitably there will be some time spent in a frenzy of organization and Superfluous Inventory Reduction. There’s plenty of material to work with at Chez Elisson, after all. And people of the Mistress’s generation tend to look at possessions differently than do we. In a nutshell, our generation purchased stuff while hers tends to rent it. As an example, we bought our music in hardcopy - LP’s, CD’s, cassettes - while they rent theirs by subscribing to Spotify and Pandora.

As for me, it’s not that I am a hoarder, per se. It’s just that I tend to, errr, accumulate stuff... much of which has little, if any, utility. And while there may be sentimental value attached to some of it, and actual value contained in some of it, a lot of it is just plain crap. If I had had to pay to move it around from place to place over the years, I probably would have looked at much more of it with a jaundiced eye. But that was never the case: Working for the Great Corporate Salt Mine had the benefit of household relocations at corporate expense.

I’ve already confessed to my irrational attachment to hotel soap, of which we conducted a massive deinventorying about eight years ago. Well, most of what remained after that clear-out is gone now... along with 99% of my huge (and hugely flammable) match collection.

Collecting matches is a mostly useless endeavor these days. Fewer restaurants permit smoking, and fewer people smoke, so the souvenir matchbook is getting thinner on the ground. But as I went through the enormous pile of Fire-Sticks I had gathered over the past forty-two or so years, there were a few that triggered some old memories.

There were a handful from my post-university cross-country trip in mid-1974. There were plenty from our sojourns in Houston, including one from the (now defunct) restaurant where I proposed to Dee back in 1977. There were some from our honeymoon. There were several from the various foreign outposts I used to visit back in the Salt Mine days. And there were some that recalled memorable dinners that Dee and I had shared, including a magical evening at Greycliff in Nassau.

With only a very few exceptions, they all went out. The memories, you see... the memories are still with us. And now there will be that much less stuff to tote around with us, wherever our travels take us.

This, by the way, was just the tip of the Deinventorying Iceberg. But it was important.

Attachment to stuff is not the path to serenity, sayeth the Buddha. Better we should be attached to people.

Good advice: I think I’ll try to follow it. But I’m not getting rid of my old Mad magazines just yet.

I wish I'd known you were throwing out the matchbooks. Those are a huge draw at my antique store. People collect them like crazy now...especially because they are a thing of the past. There really is collector for everything....even hotel soap (but that, not as much.)

I hope you'll consult with me before another mass deinventorying of "collectibles"! Ha!!