A PEEK UNDER THE HOOD

A few weeks ago, I made note of my having had my head examined - specifically, an MRI imaging of the Elissonian Noggin, in order to uncover the source of certain mysterious, ahh, discomfort that I call The Bear. (Discomfort being a nice way of describing the sensation of suddenly having a hot ice pick shoved into your jaw.)

Well, there’s always a Good News/Bad News aspect of this sort of Voyage of Discovery. The good news is that my problem is not structural - no weird malformations, no tumors, nothing that isn’t where it’s supposed to be. The bad news is, it’s almost certainly a condition that I will have to live with, since it’s One Of Those Things That Never Fucking Goes Away Permanently. But there is more good news, and that is that there are medications to treat it that usually work. Hooray for me!

Looking at your Skull-Innards, though... that’s an experience that encapsulates both good news and bad news all within itself. On the one hand, it’s nice to know that there actually is a brain stuffed into my often seemingly empty noggin: I always envision the neurologist shining a penlight into one ear and having the beam pass right through to the other. On the other hand, there’s something weirdly recursive about looking at your own Thinky-Meat. It’s like seeing your True Essence in a mirror, a view most of us are not quite prepared for.

An MRI, for those who haven’t had the pleasure, is an imaging technology that allows you to look at thin sections of your body without the inconvenience and discomfort of strapping you to a deli meat slicer. As we looked at the computer screen in the neurologist’s office - look, there’s the base of your spinal cord! - there’s your cerebellum! - I wondered whether I had lived down South long enough to have grown an antebellum. And I was pleased to hear the doctor say, “Your brain looks really good for someone your age.” That is, of course, a left-handed compliment, yet I was happy to hear it despite thinking, “It may look good, but it works like a chunk of Emmenthal’s finest.” Her comment reminded me of an old cartoon I had seen years ago, from the Princeton Tiger, our campus humor magazine: 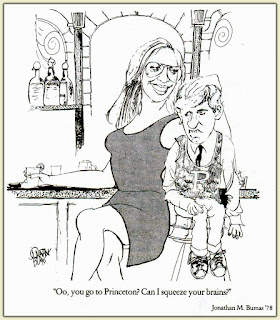 So for those who can stand to look, I present below the Brainpan d’Elisson for your delectation... a peek under the hood, if you will.

The resemblance between this image and a slice of headcheese is more than just a little disconcerting, innit?

Labels: Miscellaneous Rants, She Blinded Me with Science
Email ThisBlogThis!Share to TwitterShare to FacebookShare to Pinterest

Empty headed is not a phrase I'd ever use to describe you. EVER.

So you're all ready for time travel, apparently, as I see the flux capacitor from "Back to the Future" sitting right in the center of your brain.

It's either that or the face of Satan.