When some people think of miracles, they think of dramatic events. They think of Moses standing at the edge of the Sea of Reeds as God splits the waters. They think of Jesus turning water into wine at a wedding in Cana or feeding the multitudes with a handful of loaves and fishes. They think of Muhammad ascending to Heaven from the Rock in Jerusalem where Ibrahim was restrained by Allah from sacrificing Ishmael. Whether these events really happened matters not. These are our foundational fables. These are the Great Miracles, articles of faith.

As for me, I am a skeptic when it comes to big miracles, the wonderful stories beloved of those who share our Abrahamic faiths: I tend to view them as myth rather than historical truth. Nevertheless, I see the miracles of our daily lives all around me. The impossibly complex machines - our bodies - that allow our brains to function. The myriad pipes and tubes, the strands of nerves that allow us to awaken every morning. These are the everyday miracles, and they are numberless.

This is the story of Houston Steve, who - along with his wife Debby - purchased a house in southwest Houston in early 1979. Unbeknownst to any of us at the time, the house they bought had been ours - in fact, our very first house, the house we had purchased as soon as we had gotten engaged. But Dee and I had never sat at a closing table with them, it having been a corporate transfer... and so we had no idea who the purchasers were, nor did we care. It was sheer coincidence on an astronomic scale when Steve and I sat next to each other at post-Minyan breakfast one morning in 2002 and discovered the connection between us. After all, what were the odds?

We became good friends with Steve and Debby after that. Our friendship was, we felt, predestined... and yet it grew naturally out of our common values and interests. Besides, how many couples can claim that they each have children conceived in the same bedroom?

This is the story of Bonnie and Harris, with whom we became close friends in late 1987. Soon after we became acquainted with the couple, we moved to another town in Connecticut... and then, two years after that, to Houston. Dee and I were the godparents of their only son, and we were devastated a few years later when they announced - seemingly out of the blue - their intention to divorce.

The divorce created an unfortunate estrangement between us and Bonnie. We were no longer close when she remarried, and so we were not there to comfort her when Bruce, her second husband, passed away after only a few short years. It’s a regret that we always will carry within us.

But during Bonnie and Bruce’s unfortunately short-lived marriage, they moved to a different house on the other side of town. As Bonnie described it to a friend one day, the friend gave her a funny look. “You know you bought Elisson and Dee’s house, don’t you?” She had not known. What were the odds?

In 2010, Houston Steve’s beloved Debby got a bad diagnosis. She soldiered on, allowing the doctors to take out pieces of her, one at a time. What she never allowed them to take was the quality of her life.

Meanwhile, in late 2013, Dee had reestablished contact with Bonnie, who was still living in Connecticut, albeit in a different town now. They wept over all the time lost together, and their friendship was rekindled. After a visit with us in early 2014, Bonnie made plans to move to Atlanta. By that Thanksgiving, she was settling in. It did not take long before she was solidly ensconced in our circle of friends and had gotten to know Houston Steve and Debby.

These are the miracles of our technological age, the Ars Electronica that facilitate reconnections and allow unlikely new friendships to blossom. (Ask any blogger... or ask The Younger Elisson.)

Debby passed away in August of 2015. During her five-year-long struggle with the Emperor of Maladies - throughout all the surgeries, years of chemotherapy, and, as the end neared, the Gamma Knife - she had never allowed herself to be ill. Two weeks before her demise, Debby and I had been at Party City, buying supplies for a Shabbat dinner she knew would be the last she would host. When things suddenly became dire, she retired to a room on the ground floor of her home and passed within thirty-six hours... and as was her wish, she left her house feet first.

Houston Steve and his children grieved for Debby. Our faith prescribes a seven-day period of deep mourning (shiva) followed by a thirty-day time of partial grieving (sh’loshim) during which certain normal activities are resumed, and Steve followed these prescriptions carefully and lovingly in the arms of a supportive community. But in his heart Steve had been grieving for years... ever since the day Debby received the Bad Diagnosis.

As Steve resumed social activities - some within our circle of friends, some not - we knew that there would inevitably be situations in which Steve and Bonnie would be together. We made sure that other friends would be around at such times. We were not going to be playing Yenta the Matchmaker.

And yet... this is a story about miracles.

One day last fall, Steve and Bonnie informed us that they were going to start seeing each other. And, some months afterwards, they announced their engagement. We were ecstatic.

This past Thursday, they were married in the little chapel in which we conduct our daily morning services. It was an intimate affair, with just a handful of Houston Steve’s relatives and a small group of friends. Despite my being a skeptic in matters having to do with the Afterlife, I could almost swear that Bruce and Debby were both looking on, smiling approvingly. 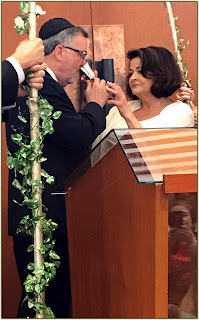 One of the Great Miracles? No, this one was not quite Scripture-worthy. No seas were split; there were no heaven-ascendant chariots; no transmutation of beverages.

An everyday miracle? Absolutely not: what were the odds?

But that this was a miracle, I did not doubt for one second. And we were there from the beginning.

Beautiful - I have tears!

Cogratulations and best wishes to Steve and Bonnie. It is an incredible stofy.

Some of your best writing (which is saying something!).

Of course, you had good material to work with. But then, so do many people who miss (or ignore) the everyday, garden-variety miracles they encounter in their lives.

Thank you for sharing... and mazal tov to the happy couple. Without pain and sadness, how could we ever appreciate, or even recognize, the joy?