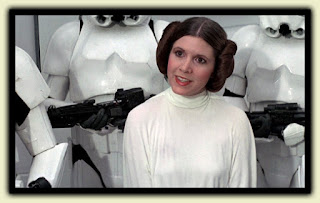 Carrie Fisher (1956-2016) as Princess Leia in Star Wars, the film that instantaneously transformed her into an icon.

2016, with less than one week left to go, has claimed yet another pop culture luminary in a year that saw the Reaper’s scythe especially busy among the greats of music and film. Carrie Fisher, the daughter of Hollywood royalty and herself a filmic icon owing to her roles in the films of the Star Wars saga, has passed away at the age of sixty.

Most of us of a certain age remember the first time we saw Fisher - the daughter of Eddie Fisher and Debbie Reynolds - onscreen. It was in Star Wars (the first, the original Star Wars, when it was the only Star Wars, before the nonsense of calling it “Episode IV - A New Hope”) shortly after the implacably evil Darth Vader made his appearance. Darth was Bad News, and we knew that Princess Leia was in Big Trouble... but there was a steely resolve in her character that belied the outward tropes of the standard Damsel in Distress archetype. Dressed in flowing white raiment, she was the representative of all that was good in her cinematic universe... unlike the stormtroopers surrounding her, whose white outfits were simply there to offer a photographic contrast to their evil, ebon-clad Department Manager.

Fisher did not have the easiest life: Children of Hollywood royalty seldom do. The sudden shock of unexpected fame? Not exactly, because Carrie was famous simply by birthright. After the huge success of Star Wars, she was more than famous - she was instantly and forever a part of the popular consciousness to a completely unprecedented degree. But add to that problematic degree of celebrity a cocktail of drugs, inappropriate relationships, and bipolar disorder, and it’s a miracle she survived the 1980’s. Thanks to rehab and a sardonic wit that blossomed when she began to write, she did.

Sixty is far too soon to move on to the World to Come. At least, so it seems to me, someone who lost his mother when she was that same age. We will miss you, Carrie.

Ave atque vale, Princess - may your soul plumb the deeps of space and those galaxies far, far away.

Postscriptum: One day after Carrie Fisher’s untimely passing, her heartbroken mother joined her in the World to Come, having suffered a stroke. Or was it a broken heart?