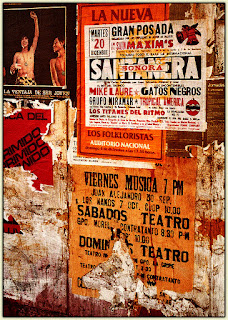 Is it just me?

Thirty-nine years ago, my in-laws celebrated their twenty-fifth wedding anniversary with a week-long trip to Mexico City... and we, being relative newlyweds at the time, were invited to join them.

For the most part, it was a delightful vacation, certain infamous parts of which I have described previously. It was on that trip that I discovered my father-in-law’s foolproof method for coping with exotic, unfamiliar Mexican cuisine: at all times, order the carne asada. Bill and I became veritabobble connoisseurs of grilled meat that week.

Back then, the Mexican peso and the US dollar were trading at a ratio of roughly 8:1. One dollar would buy about eight pesos, so prices in most places were expressed with numbers about eight times higher than the same prices back home.

It occurs to me that, with the gradual inflation that has taken place over that roughly four-decade span, that our prices today in US dollars look an awful lot like those peso-based prices did then.

Go to any white-tablecloth restaurant and an appetizer will set you back six to eight pesos - er, dollars - maybe more, even in the lowly suburbs. A mixed drink is now routinely more than a half-sawbuck, a tariff that until recently would be seen only in major urban centers like New York.

Concert tickets? They’ve gone up too, way more than even college tuition. Seeing the Grateful Dead in a gymnasium cost me all of three bucks back when I was in college. Now that Jerry Garcia actually is dead (and the rest of the band is fairly decrepit), you need to shell out $150 to see them at Lakewood Amphitheatre, where you need a set of binoculars to see the stage. That’s fifty times more expensive for a show that (nowadays) consists of a bunch of grandpas ’n’ guitars. Yeef!

Some of this is due to Starbuckization: our willingness to pay high prices for everyday items because they provide an artisanal touch that we value... or simply because they’re marketed effectively. The cup of Joe squirted out by a barista is so much nicer than the stuff the local luncheonette pours out of the Bunn carafe, and we are willing to pay for it. That nice bottle of water that costs two bucks at the gas station (or five bucks at the movie theatre) isn’t all that different from the stuff that comes out of the tap for almost nothing... but we buy it.

And some of it is due to the tendency of us Old Mature Folks to use the prices we became familiar with in our younger days as the measuring stick with which we assess everything around us. Of course I don’t expect to pay the same 25¢ for lunch that I did in grade school... but that memory stays with me anyway. The $20 that bought me a week’s worth of groceries in college now might cover a single meal’s worth of provender... and I remember that, too. I remember how much I paid for my first apartment... my first car... my first house. (I also remember how much my first annual salary was. It was, as you’d expect, proportionately minuscule.) Everything costs more now.

Look, price inflation is not surprising. Hell, when I visited Rio de Janeiro in 1988, prices in Brazil were inflating at the rate of one percent a day. That meant that every three years, the value of your money would drop to one-tenth of one percent of its earlier value. You would spend every paycheck immediately: Use it or lose it. And every three years, the government would lop three zeroes off its currency denominations and give it a new name. Cruzeiros. Cruzados. New Cruzados.

We haven’t had to do that here. Yet.

So when I go to the mall and gape, horrified, at every price tag, part of my horror is simply because those price tags look like something I might have seen in Mexico almost forty years ago. For those of us of a certain age, sticker shock is simply a way of life.

Now, get the hell off my lawn!