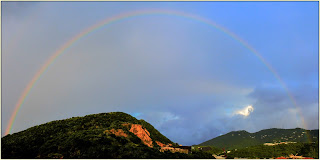 Rainbow over Charlotte Amalie, St. Thomas, symbolizing the calm after the storm. Maybe.

It is the forty-first anniversary of my meeting Dee for the first time. It is also the penultimate day of Chanukah. The final day of Chanukah rarely coincides with the secular New Year’s Day, 1979 being the last time it happened... but here we are.

Many of us will be more than happy to see this year depart, for this was a year in which the Grim Reaper’s scythe fell heavily in the fields of celebrity, especially among the musicians who provided so much of the sonic landscape of the past thirty-plus years. David Bowie. Prince. George Michael. Leon Russell. Leonard Cohen. Merle Haggard. John Berry. Maurice White. Paul Kantner. Glenn Frey. Frank Sinatra Jr.

Not a comprehensive list, but you get the idea.

Other pop icons were not exempt. The final week of the year saw the demise of Carrie Fisher, carried off by a heart attack at the age of sixty... and then joined the very next day in the World to Come by her mother, Debbie Reynolds. Tragic.

The year 2016 also saw a Presidential election in these United States that will be the subject of innumerable history books for decades - perhaps centuries - to come. Not even Marty McFly could have imagined that Biff Tannen (for whom Donald Trump was the inspiration) would be elected President a mere year after 2015. Interesting times.

On the personal front, the year brought its share of challenges as well. The first four months were almost entirely occupied with Dee’s painful recovery from a Christmas Eve fall that broke her left hip and simultaneously shattered her left wrist. As if that were not enough, both of her brothers had major health issues early in the year (from which they have since recovered, thank Gawd, kein ayin hara.) The only good thing you can say about health issues is that if you survive them, you can either live in terror of the next problem to come along, or you can appreciate life and its manifold daily blessings a little more.

But it hasn’t been all thorns in the Elisson rose garden... not by a long shot.

Elder Daughter has kept a busy frantic schedule, developing performances and bringing them to the stage in places such as Berlin, Ljubljana, and far flung Philadelphia. The Mistress of Sarcasm is now ensconced in Kingston, NY, where she and her boyfriend are modifying a building to house them, their respective studios, and a few paying tenants.  Meanwhile, The Other Elisson - my kid brother - has had a wonderful year, not only celebrating having logged six decades’ worth of Circumsolar Voyages, but finding a Special Someone who, to all appearances, has brought real delight into his life.

Chez Elisson is now home to two - count ’em! - two kitties. Edith, a muscular tuxedo shorthair barely out of her kittenhood, joined us in September, a gift from the Mistress of Sarcasm. She and Stella have gradually worked toward a modus vivendi after an initial period of mutual loathing. Together, they provide endless moments of amusement... and together, they generate massive amounts of Kitty-Waste, thus providing continuous employment for our Litter Genie.

A wise woman once told us that love is a verb... and it was in the early weeks of 2016 that her words took on a deep and resonant meaning for me. Love is a verb, and it’s the things you do that matter far more than the things you say. As I have observed previously, the Cocktail of Life is inevitably a mixture of the sweet, the sour, and the bitter, and it is the balance between those elements that allows us to taste joy to its fullest. May your 2017 bring you joy in its greatest measure... with health, happiness and fulfillment, without limit to any good thing.

Best wishes for 2017, to you and the family. Peace and blessings.