DOWN WITH THE SLICKNESS

We’re in the early stages of what they call a Winter Weather Event here in north-central Georgia, with the ground (and roads) getting covered in an ever-thickening layer of slick white stuff.

The local schools have released their inmates students early, clogging the roads with panicked mommies and daddies who now need to schlep Junior home where he can enjoy his video games and hot cocoa in lieu of his education.

The aforementioned clogged roads are packed with idiots. Okay, that’s true on any randomly selected day, but the idiocy level hereabouts ramps up to an astonishing degree when there’s the most minimal suggestion of ice on the roads. Normal driving practices - don’t block intersections, for example - are kicked to the curb, exacerbating an already nasty situation.

Mark Twain is usually credited with the observation that “everybody talks about the weather, but nobody does anything about it.” As if to prove him right with a vengeance, the media are providing their usual frantic running commentary. If boiled down to its quintessence, said commentary consists of various rephrasings of “It’s snowing and the roads are slicker than snot.”

We don’t get snow very often around these parts, at least not enough to accumulate. The public works departments are ill-equipped to handle jobs like sanding and salting the roads, much less plowing them after a snowfall. (“Whutchew think this is, Spud... Chicago?”) Combine that with a goodly supply of hills and curves, and you have every reason to simply hunker down in place... much as we had to do in Foat Wuth after the infamous ice- and snowstorm that struck on December 5, not quite eight weeks ago. Hey, it’ll melt eventually.

“When in danger or in doubt, run in circles, scream and shout.” Herman Wouk’s advice is clearly being heeded by the thundering hordes who even now are scouring the supermarket shelves for the basic Snowstorm Emergency Supply Pack: bread, milk, and toilet paper. But not us. I can bake any bread we might need, and the Missus and I don’t drink milk. We have enough Tee-Pee to house a whole tribe of Native Americans. So the usual panicked last-minute foraging is unnecessary. Too late for that anyway.

A nice pot of lentil soup and a few tots of whisky, and I do believe we can weather the storm.

Postscriptum: The Cobb County schools declared an early dismissal, but they may have waited a tad too long. By the time the middle schoolers were released, the buses were having a tough go of it... slowing matters down yet more. It was closing in on 4:00 pm when The Missus was finally able to leave, by which time the roads were completely buggered. Being of sound mind and body, she decided to walk home rather than take her chances in the car. She managed to make the 2½ mile trip on foot in less than 55 minutes. (Meanwhile, horror stories of 6+ hour homeward journeys and of people camped out in Waffle Houses began to pour in.)

Now that we’re both home, I am prescribing roasted salmon, roasted Brussels sprouts with capers and balsamic-soaked dried currants, lentil soup with beef kielbasa, and lashings of High West Campfire.

Postscriptum the Second: Rather than hitting hardest south of the metro Atlanta area, the storm struck the city head-on with not all that much snow, but with horrendous icing conditions. Coupled with hilly topography, snaky roads, and enormous amounts of (routine) truck traffic through and around the city, all that iciness created a traffic clusterfuck of epic proportions. The last time we saw anything like this was in January of 1982 - the infamous SnowJam. (The winter storm of January 2011 - dubbed Snowpocalypse - dumped more snow on us, but the city seemed to be more prepared for it.) But looking at the photos and hearing the stories, I’m thinking that SnowJam 2014 has exceeded them all.

Postscriptum the Third: Atlanta brought to its knees by a two-inch snowfall? Har dee har har. The Daily Show weighs in... 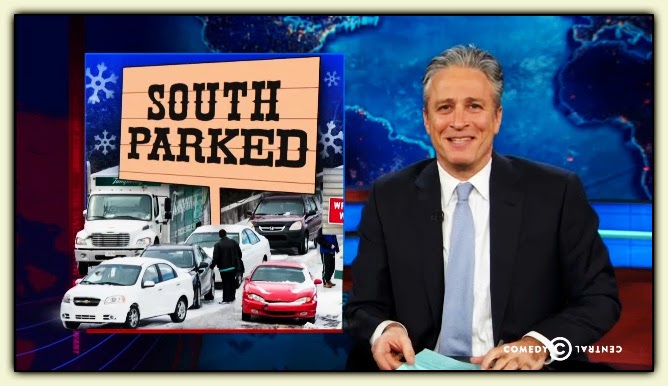 Labels: Everybody Talks About It, Miscellaneous Rants
Email ThisBlogThis!Share to TwitterShare to FacebookShare to Pinterest

Kudos, to your wife for making the decision to walk. I am sure that there were thousands of other people that wished that had made or were able to make the same decision. Did y'all have any disruption in power or was the problem solely with the traffic.

I was in eighth grade during Snowjam 82, and being out of school for the better part of the week was the time of my life. There was a lot more snow then, but the same problem now - with deep-frozen roads due to days of polar temperatures, any measurable amount of precipitation turns them all into skating rinks. Add in Atlanta's winding roads and hilly topography, and you have all the ingredieants for a trafficopalyse.

Jason, our power supply is generally pretty resilient. No general disruptions that I'm aware of, either. That's probably because this was a snow event rather than an ice storm - the classic bane of the southeast.