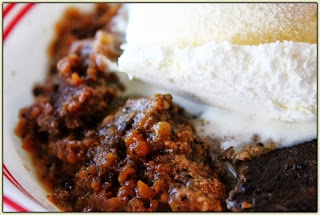 I have no idea how I missed this, but this Wednesday just past - November 13 - is National Indian Pudding Day.

I had no idea there was a National Indian Pudding Day.

I am sure many of my Esteemed Readers are busily scratching their heads and mumbling to themselves, “WTF is Indian Pudding anyway?” And that is understandable, because Indian pudding is little known these days unless you are a New Englander... and even then, it’s not exactly on many people’s food-radar.

That’s unfortunate. There are few desserts that share its authentic Early American pedigree, a pedigree that makes it a logical (and tasty!) addition to the Thanksgiving table. It is, in fact, a uniquely American take on a classic English dessert, the famous “hasty pudding” to which the lyrics of “Yankee Doodle Dandy” refer. Unlike hasty pudding, however, the version on this side of the pond uses cornmeal, AKA Indian meal. Also unlike hasty pudding, it is in no way hasty: It requires several hours of slow cooking.

Indian pudding is, at heart, cornmeal mush - a cousin to polenta and mamaligeh (from Italy and Romania, respectively). What turns it into a desserty affair is the addition of sweeteners and spices: molasses and/or maple syrup; cinnamon, nutmeg, ginger. These are all warm, autumnal, pumpkin pie-like flavors, and this time of year they just taste right. Add a scoop of ice cream or a dollop of bourbon- or brandy-infused hard sauce, and you’ve got yourself a treat.

There are probably as many recipes for Indian pudding as there are Indians in India... but the one I’ve used in the past comes from the redoubtable Maida Heatter, who goes the maple syrup route - very New Englandy - and who throws golden raisins into the mix. You can find it here.

The only negative, aside from the stupendous calorie load? Indian pudding is not especially photogenic. It’s not cute or pretty, like an elegant parfait or a beautifully decorated cake. It looks more like something you would scrape, cursing, off your shoe. But are you gonna eat it, or stand there looking at it?

To be honest, I haven’t had I.P. for years - but this might be a good time to break out that sack of stone-ground cornmeal and that big old jar of 100% maple syrup. As much as I love my rice pudding, chocolate pudding, and Christmas pudding, Indian pudding is the pudding for a cold November day!

I'm strangely reminded of Sri Lankan jaggery cake, which I found addictive. The wife of one of my best friends is Sri Lankan; one time, she pulled out a humble-looking package of jaggery cake, broke off a piece for me, and started me on the road to sugar hell. Like Indian pudding, jaggery cake has many spices in it. It's also super-sweet, so it isn't for everyone—just for those of us blessed or cursed with a major sweet tooth.

Kevin, I have a big chunk of Indonesian palm sugar - it's pretty similar to jaggery. I was saving it for my next big curry project, but maybe I could use it on a jaggery cake.