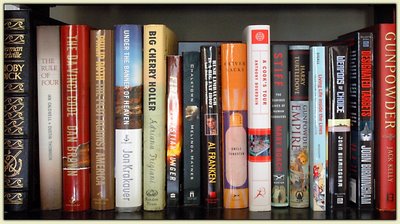 I have been remiss in posting about the books I’ve been reading, my last one having been about thirteen months ago.  Is it laziness?  Is it the fact that nobody actually reads blogs anymore, so what’s the point?  I dunno...

...but it’s as good a time as any to reflect on Booky World.

For better or worse, the Elisson Bookshelf is becoming increasingly virtual.  I loves me my hardcovers, and there is nothing like the heft and feel of a good solid book in my hand... yet I find myself frequenting the Kindle store more and more as time flows by.  Fact is, ever since the nearby Borders store folded, I use Amazon for most of my hardcopy purchases anyway, and the virtue of buying books in electronic form is that I get them delivered instantly, rather than having to wait (heavens!) as much as 48 hours for them to arrive.  There is also something to be said for the ability to carry an entire library’s worth of books in one hand.

The Missus once noted that I have a habit of absentmindedly caressing the right edge of my books with a finger as I read them... a subconscious way of creating a certain tactile connection to whatever I’m reading, perhaps.  Yet when I use my iPad to read, I do the exact same thing.  Weird, eh?

Anyway, here are the books I’ve been reading lately, with the electronic ones marked with an asterisk...

The concept is simple: We need soldiers to fight our wars in Deep Space as Earth tries to extend its influence and territory... and lengthy life experience is a plus. So join the Army, get a new body, and if you survive all the horrors that the Universe throws at you for a couple of years, you get a place to homestead.

What's a bowlworld? Like half of a Dyson Sphere?

And I have to say that that Anne Frank novel sounds positively offensive. To me, Anne Frank is on a very short list of DO NOT TOUCH—EVER taboo subjects. The poor little girl suffered enough. So I have to ask: was it a good read?

I've recently discovered Stephen Hurt. He has a growing series, starting with Court of the Air. The series has been described as 'Charles Dickens meets Bladerunner'. More Dickens than Bladerunner, perhaps, but a fair appraisal.

Working my way thru The Bible, on a read-it-in-a-year plan.

Read a couple of the Wallander books by Henning Mankell.

Currently working on "The Girl with the Dragon Tattoo".

Just finished up the Jesse Stone series, by Robert B. Parker. That included the two latest, by one of the (I think) producers of the made for TV movies w/ Tom Selleck. Loves Parker, jury's out on the new guy. One more of his should decide it.

@Kevin - Yes, "Bowlworld" is exactly that: half of a Dyson sphere.

As regards Anne Frank, that particular novel is an exercise in Black Humor, and the character manages to be funny (in a perverse way, of course, like the rest of the book.). A non-Jewish writer probably couldn't pull it off, but I thought it worked.

Just this afternoon, I started Moby Dick for a Piraeus seminar at St. John's in May. I'm hoping that will give me enough time to finish, especially as I'm co-reading it with The Power Broker. What was I thinking?!

I'm also looking forward to the next book in the Siri Paiboun mystery series by Colin Cotterill. Dr. Paiboun's the French-trained national coroner of Laos in the 1970s and it's a bizarrely entertaining set of stories.

@Amy - Having reread Moby Dick almost nine years ago, I can say that I enjoyed it a lot more at age 51 than I did in high school. You should have no problem finishing it by May; you may not even want to put it down.

I read "The Source" about five times already. Now that you've jogged my memory, I may have to do it again.