A WEEKEND IN PHILLY

Independence Hall, site of the signing of the Declaration of Independence, meeting place of the Second Continental Congress... and, most important, where we changed Elder Daughter’s diaper during our visit to Philadelphia in 1980.

The Missus and I were in Philadelphia this past weekend, having traveled there to see Elder Daughter perform in Colony, a dance piece that she had co-created last year for the D.C. Fringe Festival.  With the Mistress of Sarcasm driving down from her digs in upstate New York, it was the perfect opportunity for a mini-Family Reunion with our girls.

Given the short duration of our trip, we flew to Philly on the Silver Aerial Bus.  Flying, it should be noted, is not one of SWMBO’s favorite activities... yet this time, she displayed none of her usual agita while flying.  Cool as the proverbial cucumber, she was.

We both suspect that this is the result of having had an uneventful overseas trip this past summer, when we flew to Israel.  The toughest part of that trip was the layover at JFK International in New York: the lengthy transatlantic flight, by comparison, was a piece of cake.  (A dose of Lunesta helped.)

One thought both of us had at almost the exact same time: Since smoking is verboten on pretty much any flight anywhere, there’s little point in the airline manufacturers continuing to build planes with a “No Smoking” lamp above every seat.  Why not replace those with a “Turn Off Electronic Devices” sign?  Just an idea. 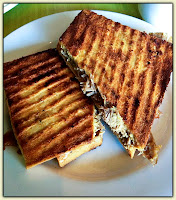 We enjoyed our time in Philadelphia, as usual.  It’s a town that boasts both excellent food and some of the most obnoxious roads, the latter being especially evident in the Northern Liberties and Fishtown sections.  (Driving on East or West Girard Avenue is enough to give a rational person a shit-hemorrhage.)  But ya gotta love a place where you can score a duck confit Cuban sammitch for breakfast.

For the first time in three decades, we had a chance to wander around parts of Old City... places we had not seen since late 1980 when Elder Daughter was a mere sprat.  I am pleased to report that Benjamin Franklin, celebrated Renaissance Man, American patriot, founding father, and noted roué, is still tucked away beneath the soil in the same spot at the northwest corner of Christ Church burial ground where we last saw him.

We had an all-too-brief visit with Susan K., a Friend of Long Standing whom I have known since our first encounter in third grade over fifty-two years ago.  She had been in town for a board meeting, giving her, SWMBO, and the Mistress of Sarcasm a chance to meet for the first time.  We were also able to spend some time with Elder Daughter’s friend Hilary, who (not incidentally) is the one who taught E.D. the secrets of Challah-Making... which means that I have her to thank for the tasty loaves that I have been producing for the last year or so.

And Elder Daughter’s performance?  Mesmerizing... and just plain amazing.  (Of course, I speak as a completely disinterested party, not as a Proud Daddy in awe of his talented child’s accomplishments.)

Penn’s Landing: The view from our hotel room.

Labels: Travels
Email ThisBlogThis!Share to TwitterShare to FacebookShare to Pinterest

Ah. The USS Olympia. Is she still resting on the bottom and leaking badly. Such a tragedy for such a historic vessel that we had hoped to preserve. I suppose remembrances of American imperialism aren't fashionable.

I once stood on the deck of that ship and said (as have so many others), "You may fire when you are ready Gridley."