This Saturday evening just past, we threw a little get-together for our friend Laura Belle.

“Little get-together” is, perhaps, a mild understatement when describing a surprise birthday bash with close to forty attendees. But there are certain occasions that demand to be celebrated, among them those Significant Birthdays on which the tens digit of the Age-O-Dometer clicks over. And Don, Laura Belle’s other half, was all to happy to let She Who Must Be Obeyed take the reins with regard to planning and execution... because let’s face it, party planning is one thing in which the ladies far exceed the gentlemen.

If Don or I had planned this thing, it would have ended up as a dinner out with a bottle of wine and perhaps a Gooey Dessert. In other words, inconsequential. Not on SWMBO’s watch.

One of the first decisions she made was that it would be a surprise party. This is trickier than it seems, because preserving the element of surprise requires extraordinary discretion on the part of all invitees. As the invitation list expands, the chance of someone inadvertently spilling the beans grows exponentially. This can be expressed mathematically as follows:

where Lfu is the likelihood of a fuckup, Ni the number of invitees, and y the coefficient of yakkiness, a number that is invariably greater than 1.0. Here’s a graphic representation: 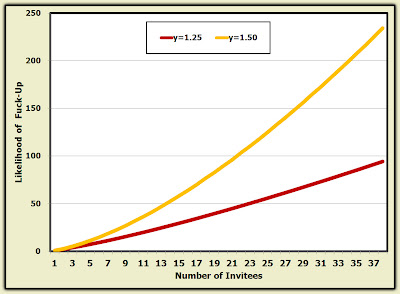 Aside from discretion, pulling off a successful surprise party requires subterfuge. Stated simply, the intended honoree must be sold a bill of goods, hornswoggled, and eye-enwoollened. A plausible scenario - a cover story - must be created such that the honoree can reasonably be expected to be in the appropriate place at the right time: in addition, everyone with whom the honoree interacts must have the story straight so that no unreasonable inconsistencies can creep in. This is more difficult than it seems, unless the honoree is exceptionally credulous.

[One could, if one chose to do so, find philosophical issues with such an exercise of subterfuge on a friend or loved one. Sure, you can plan a surprise party by the use of Effective Techniques of Fabrication... but does that not also rouse the suspicion that, if one is that good a liar, one could also lie about other, more delicate matters? Just a perverse thought...]

To get to the matter at hand, Laura Belle was completely taken in by the carefully planned cover story concocted by Don and SWMBO, enabling Don to transport her to our house completely unaware of the impending festivities...

...that is, until they pulled up in our driveway where a crowd of almost forty people bedecked with glowsticks awaited them. Among the crowd was Laura’s brother Bud, who had made the trek down from Philadephia to be here for the occasion... yet another surprise.

Inside, a margarita machine merrily cranked out frozen ’ritas - one of Laura Belle’s favorite tipples - by the snootful. For those who preferred other beverages, there was plenty of wine, beer, and soft drinks.

Dinner consisted of a kale salad with black walnuts, pears, and dried cherries in a walnut-sherry vinaigrette; chicken with red peppers and artichoke hearts on a bed of orzo; roasted zucchini and yellow squash with green Vidalia onions; and slabs of grill-roasted salmon.

It was quite the gathering. Friends, family, the Friday night dinner crowd, all assembled to celebrate one of those milestones that comes along only once every decade. And in the midst of all the conviviality, Bud trotted out a touching poem that recapped life with his kid sister... followed by Don’s slide show. Smiles, laughs, and not a few moist eyes.

After that, in time-honored Birthday Party Tradition, it was Cake o’Clock.

Laura prepares to blow out the candles.

Listen: Life is full of disasters, uncertainties, and Nasty Surprises... which means you’ve gotta celebrate the happy occasions every chance you get. And, with Laura, celebrate we did!
Posted by Elisson at 10:45 AM

(And I loved the graph.)

Second paragraph, fifth line. Find the grammatical error and fix it. Then you get an A+ for a well written essay.

And yes, it was a grant time!

@Houston Steve - I'll see your superfluous "the" and raise you a misspelled "grand." On second thought, since string raises are not permitted in our game, I'll just... oops.

The Other Elisson said...

That looks like one fabulous party. I'm on a sugar high just looking at the dessert table. Apparently the coefficient of yakkiness was kept under control enough to keep the party a surprise.