Earlier today, Dee and I were going through a small corner of the massive Archive d’Elisson, trying to decide what to hang on to and what to pitch. That’s especially challenging for us, given that every single household move we’ve made for the last thirty-nine years has been a corporate affair... which means that we’ve carted around Stupendous Amounts o’Crap simply because we could. Occasional decluttering notwithstanding, we are overdue for a massive inventory reduction.

Books are just one corner of the Archive, and getting them moved to the basement - a stage in their eventual onward travels - is an exercise in Letting Go. And some things, we’re just not ready to let go.

Case in point: a book of nursery rhymes that Mom gave the Mistress of Sarcasm for her fourth birthday. When we opened the book and found the inscription on the flyleaf - an inscription in my mother’s distinctive handwriting - I just about came unglued. It was just one tiny reminder of a hole in our lives. A Missing Person.

We all - most of us, anyway - have those Missing Persons. As we get older, their numbers increase, until eventually (but not too soon!) we join their ranks. And my mom went missing almost thirty years ago. You get used to that feeling of loss, because you have no other choice... but it’s always there. And once in a while, in addition to formal occasions of remembrance (for us Red Sea Pedestrians, five times a year), you get reminded informally.

A scrap of handwriting. A photo album. Perhaps an old video or even a home movie.

Or an inscription in a book. It’s so appropriate. She and my Dad devoured books like most people snarf up salty peanuts. I owe my love of books - especially SF books - to her. She could (and did) discuss Childhood’s End with a seven-year-old Elisson who had read it and was blown away by the ideas contained therein.

Damn, I miss her.

Today is her ninetieth birthday. It’s a perfect day to toast her memory with a Rob Roy - her favorite cocktail for Special Occasions. 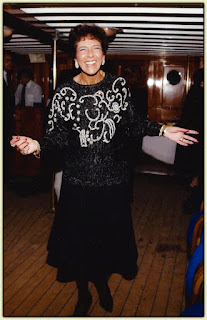 Mom celebrates at Cousin Stef’s wedding, October 1987. This is how we remember her: an irrepressible spirit.

You know, I sometimes feel like I have huge holes in my life. Then I talk to my grandmother, who is 93 years old, and I realize how much worse it could be and how much worse it's going to get. The entire context of her life - important people, loves, enemies, everything - is gone.

It tends to make me clam up and almost STOP clining and caring to what is left. But I can't do it. One has to care, right?

Happy birthday to your mother, even if it hurts, I suppose.