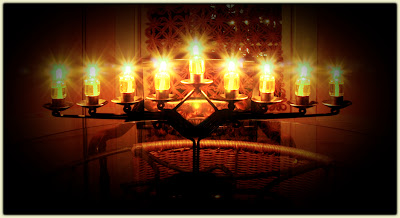 [If Dear Abby can get away with recycling the same Holiday Columns every stinking year, why not Elisson? We are therefore pleased to offer this thirteen-year-old Editorial Response previously published here and at Blog d’Elisson, one that is both timely and appropriate to the season. Chanukah begins at sundown Tuesday evening, December 12 this year.]

A very Happy Chanukah to you and yours! Peace and blessings.

"The most real things in the world are those that neither children nor men can see."

I love this quote.

I also have the sudden urge to buy some patio furniture for my parents for the upcoming holiday. Maybe subliminal advertising... I'm not sure.