Birthday flowers for the Missus, courtesy of Laura Belle.

A bunch of our good friends got together to celebrate The Missus’s birthday a week early, and in addition to my usual Challah-Loaf Contribution, I was asked to provide a dessert.

That’s a dangerous request to make... because when it comes to desserts, Mister Debonair is serious.

Perhaps because I indulge in the Sweet Stuff less frequently than in days past, when I do, I want to make it count.  And since this is one of those major birthdays for She Who Must Be Obeyed - the kind with a zero in the units column - I wanted this dessert to be extra special tasty good.

Cakes?  Pies?  Pfaugh.  Those are OK.  Hell, they can even be spectacular.  But your average pie or cake is not jaw-droppingly, astonishingly special.  Cobblers?  Tasty but rustic.  Same goes for your grunts, slumps, and pandowdys.

A big honkin’ dessert soufflé?  Sure, but that has to be readied in advance and prepared at the last minute... and this was not going to be at our house.  No.  A frozen dessert was the way to go, and I knew just which one I would make:

Wuddat?  It is a frozen white chocolate mousse.  More exactly, it is a frozen mixture of whipped cream and meringue, delicately perfumed with kirschwasser, with a pile of white chocolate shards embedded therein much like raisins in a plum pudding.  It is both decadent and delicate at the same time... and completely irresistible.

Look, I’m a confirmed chocolate lover, by which I generally mean the brown stuff.  Chocolate, by most reasonable definitions, needs must contain some amount of chocolate liquor.  White “chocolate” is merely a confection, one that combines sugar and milk solids with cocoa butter.  The cocoa butter contributes a subtle chocolate aroma, but that is the extent of it.  (If you run across anything that looks like white chocolate but which includes any fat other than cocoa butter in its ingredients, drop it and run like hell.)

But in this dessert, white chocolate really shines.

The recipe is from Maida Heatter’s Book of Great Chocolate Desserts, a book that I’ve owned since 1980 (!) and which is indispensible to anyone with a sweet tooth.  There’s a copy of the recipe here that appears to be lifted right out of the book (sans Maida Heatter’s notes - and probably her permission, as well).  Following her recommendation, I use white Toblerone, which has almond bits embedded in the white chocolate.  This time, however, I substituted raspberries for the strawberries.  I may never go back to the original.

How was the rest of the meal?  It was ridiculously good... a group effort, with every family throwing something yummy on the Food-Pile.

Our friend Laura Belle made a delicious, meltingly tender braised brisket, while husband Donnie Joe grilled huge slabs of salmon. Tasty hors d’oeuvres, grilled vegetables, garlicky roasted potatoes, and a crisp salad accompanied the mains. And desserts there were a-plenty: in addition to the aforementioned Mousse Brillat-Savarin, there was a fine carrot cake (ya gotta stick a candle in something!) and chocolate chip biscotti with a delicate anise flavor note.

It was what we call a real belt-loosener.

But the best part?  The best part was when the Mistress of Sarcasm made her appearance, having driven down from upstate New York the day before in a straight 17-hour shot... all on the down-low in order to surprise She Who Must Be Obeyed. 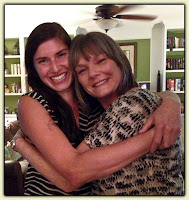 Labels: Comestibobbles and Potaboobles, Occasions
Email ThisBlogThis!Share to TwitterShare to FacebookShare to Pinterest