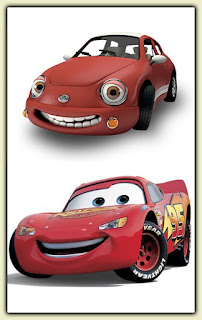 I think I prefer the Chevron car. But I'm not really a person who ascribes personalities to my vehicles (or other people's vehicles).

I don't even name my cars, which appears to be a thing for a LOT of folks.

But then again, I've never encountered a self-driving car. yet.

Can Herbie the Love Bug be far behind?

The Pixar method is much better. Look s friendly. the eye in the headlights way looks sort of creepy.

Chevron. No reason for my preference