Whenever the Missus and I go on a lengthy Road Trip, the issue of what to eat will inevitably raise its ugly head.

We always hit the road with a good supply of Snacky Goodies. Cold beverages, bottled water, nuts, mini-meals, et cetera - were we blessed with an infinitude of bladder capacity, we could theoretically drive all day without having to stop and eat. But even if we do not need sustenance at regular intervals, the SWMBO-Mobile does... at least, until they get around to inventing that Mr. Fusion garbage-to-energy converter from Back to the Future. (They’ve got just one year left. Time to get busy!)

THis means that, every couple of hours, we pull off the highway for a Pee-Break, a Refueling Stop, a Snack-Break, or some combination of the three.

Some of our stops land us at various fast food outlets, where you can generally count on clean restrooms and drinkable (if not palatable) coffee. As a rule, we don’t do the Fast Food Thing when we’re at home, so this is the opportunity for us to indulge those all-too-rare nostalgic and/or guilty pleasures. Quarter Pounder with cheese! Frosty! Bring it on!

Except now, McDonald’s has begun posting calorie counts on their menus. On the menu, that is, not buried in some you-gotta-ask-for-it literature. Getting a jump on Federal legislation, I’m betting. And the numbers are, in a word, horrifying. When you see a four-digit calorie count next to a frickin’ breakfast item (never mind the burgers, fries, and shakes!) it has a pronounced appetite-dulling effect. There’s no way I want to gobble up three quarters of my daily calorie allotment before nine in the morning... yeef!

I’ll just drain the lizard and have a cup of coffee, thanks.

Then there are the truck stops and Fuel Plazas... kind of like a theme park of Road Life. The food choices there are downright staggering. Jack Link’s Beef Jerky? Check. Sasquatch sausage? Check. Klondike bars? Check. And then, you have these: 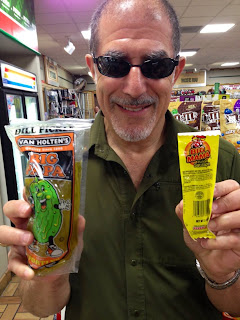 Whoever thought to name a picked sausage “Big Mama,” I have no idea... but that dinky thing ain’t gonna impress any Big Mama I know. All I will tell you is, these items are on my list of Foods to be Eaten Only in the Aftermath of a Nuclear Holocaust.

When the Juju Woman and do road trips, we always pack real food. It might be something we cooked up the night before, of it might be something like fresh sandwiches with all the condiments, etc. Fruit salads, for example travel well, as does Gazpacho. Meats, cheeses,condiments, everything we need for a picnic. We pack a large cutting board which doubles as a counter, several coolers of different sizes with clean ice, real cutlery, napkins, towels, and paper plates, bowls, cups, cleaning stuff, including WetNaps.

Throw a good book(s) in the CD, and hit the road. For us, it's the only way to travel by land.

Enter Stretch...Stretch travels well, and we take him everywhere we go. We, of course, won't let him fly (ears), but if it's an overnighter or two, we always find (in advance) overnight lodging thats dog friendly. You'd be amazed how many are, especially for small dogs. He easily makes it under the weight limit, if there is one. If not, we've been known to sneak him in. It's not about the money...we loves us a good caper from time to time.

The fact is: Since Stretch hijacked our lives, we've had to make some changes regarding meal preparation. All is good.

Books on CD was a great idea.

If McDonalds had some decent breakfast it might be a different story, but most of the stuff on the breakfast menu is awful. I've eaten to much fast food in my life anyway, and try to avoid them whenever possible. Of course, if they had birds nest soup or balut, I would have zero trouble avoiding THAT.

I've had bird's nest soup and, surprisingly enough, it's really pretty good. The balut, on the other hand, I wouldn't touch with a 10 foot pole even if someone were holding a gun to my head.

When the waiter comes around with the birds nest soup, I'll let you have mine, I promise.

I must confess that I've actually eaten a Big Mama pickled sausage or two... and they're pretty darned tasty.

I live on both the Big Papa Pickles and Big Moma Sausage. I get the pickles less often but that pickled sausage is VERY good. Tangy vinegar soak snack. So good. Great to take fishing or sitting at the pc gaming away. Both are also good to help settle a sick stomach.