A HOLE IN THE SKY 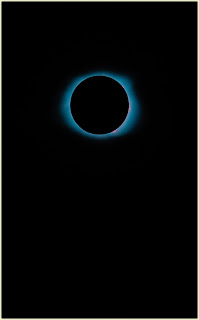 The total eclipse of 21 August 2017, photographed in Englewood, TN by Yours Truly. Several prominences are visible on the right limb of the Sun: these could be seen as red flashes by the unaided eye.

...Once upon a time there was light in my life
But now there’s only love in the dark
Nothing I can say
A total eclipse of the heart...
- Bonnie Tyler, “Total Eclipse of the Heart”

...Then you flew your Learjet up to Nova Scotia
To see the total eclipse of the sun...
- Carly Simon, “You’re So Vain”

...Mama always told me not to look into the sights of the Sun
Oh, but Mama, that’s where the fun is
- Bruce Springsteen, “Blinded by the Light”

There was a small crowd of us gathered together in front of Eric the Blade’s Tennessee compound to see an event some of us had been anticipating eagerly for years. I speak, of course, of the total solar eclipse of 21 August 2017, the one christened by the Newsertainment Media as “The Great American Eclipse,” a blackout of the Sun that would cross the entire width of the continental United States. Meanwhile, the parts of the Lower 48 that did not see totality would at least experience a partial eclipse.

Partial solar eclipses aren’t that uncommon, as it happens, but the difference between even a 99% partial eclipse and The Full Monty is, well, all the difference. The first is interesting; the second, utterly mind-boggling. For that reason, I had been looking forward to this day for over ten years, ever since I learned that the path of totality would be just a short drive north of Chez Elisson. Even better, the centerline of that path would sweep through Tennessee, passing just a couple of miles north of Eric and Fiona’s place. It would be hard to find a better excuse for a blogmeet.

Dee and I arrived early, as did K-9 and Red, his elusive (and lovely) bride. Sunday night, Tommy and Shyam stopped by, and in the wee hours of the morning, the Mistress of Sarcasm cruised in after having dropped Erica and The Other Elisson off at the infamous Red Roof Inn. And on Monday - Eclipse Day! - we were greeted by Eric’s Sainted Mother and her friend Barb.

Everyone was well provisioned with the requisite eclipse glasses, with Tommy and Shyam having brought a couple of colanders as well. (Colanders, aside from being a Dubious Fashion Accessory, have small holes that cast interesting diffraction patterns during the partial phases of an eclipse.) 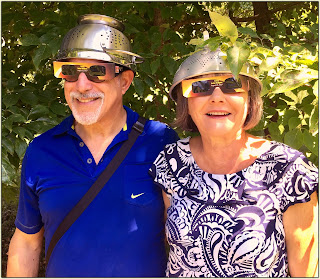 August in Tennessee can be a blast furnace, and Eclipse Day was no exception. We could almost feel our faces sizzle as we took brief peeks at the Sun through our eclipse glasses, waiting for the first chip of moonshadow to appear. It did, and we all watched the slow progression of partiality, the Sun’s weirdly obese crescent gradually looking more and more like some sort of astronomical Pac-Man and then becoming the thinnest of slivers. Even so, it was too brilliant to gaze upon without those nearly opaque eclipse glasses.

As the eclipse progressed, we all could see diffraction patterns take shape in shadows cast by the leaves, an array of crescents. Even Tommy’s colander could throw a skein of crescents across the driveway. 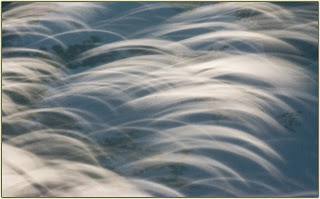 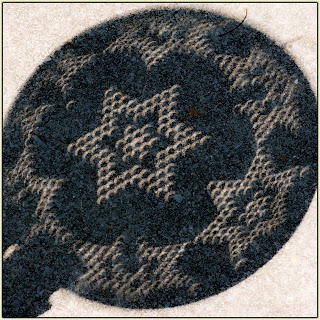 It was Eric who first noticed the cicadas, who had begun thrumming as though it were twilight. And, we realized, it was twilight. The Moon’s shadow was rushing toward us, a dusky umbrous darkening of the Western sky.

It got plenty dark for a couple of minutes.

The last brilliant sliver of sunlight vanished and the eclipsed Sun appeared in all its magnificence: a jet-black disc surrounded by the pearly solar corona. It was like nothing so much as a glowing hole in the sky. And the corona! White it was, bluish at the edges, with barely discernible reddish flickers appearing intermittently at the edge of the Moon’s ebon surface. It was a sight for which I had waited all my lifetime.

We watched, jaws agape. And then, as the all-too-brief time window closed, we could see dawn approaching... out of the west. In a twinkling it was over, and the cicadas ceased their song.

It had been awesome in the truest sense of the word, a rare glimpse of a near-miraculous phenomenon. And being able to share the experience with Dee, the Mistress of Sarcasm, my brother, and a handful of good friends? Priceless. 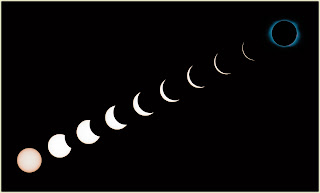 Composite photograph of the eclipse as it progressed from partial to total. Don’t let those thin crescents fool you: Even the thinnest sliver of unobstructed Sun was too brilliant to look at without eye protection.

I can now check “See a total solar eclipse” off my bucket list. But there’s another one coming down the pike in seven years (8 April 2024) and it’ll be a doozie, with totality lasting about four and a half minutes. The centerline of totality will pass almost right over Kerrville, Texas; just a hair west of Cleveland, Ohio; right over Buffalo and Rochester, New York; and will touch the northernmost tip of Prince Edward Island. Plan ahead! 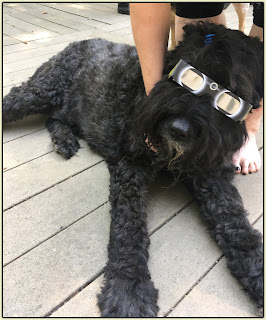 Big Jack sez, “Hey, did I miss something?”

Labels: Exceptional Images, Occasions, Perforated Headgear, She Blinded Me with Science
Email ThisBlogThis!Share to TwitterShare to FacebookShare to Pinterest