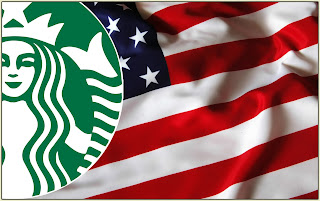 Naw, you don’t have to waste your pamphlets on me. I’ll be voting the Green Lady, just like last time.

I’m old enough to remember having my first Starbucks coffee, on a chill winter’s day back in 1991. So I guess you could say I was a Party man from way back... a whole lifetime ago, seems like.

It was the Citizens United decision that changed everything. Once corporations were considered to be people for the sake of funneling money into the political process, it was only a matter of time before they were considered to be people who could actually hold political office. At least, so said the post-Trump SCOTUS, and nobody felt like arguing. Argumentative folks had a way of disappearing.

Hell, we didn't even need a Constitutional amendment to do it, according to SCOTUS... and they had the final say-so. As long as a corporation was founded in these United States and was at least thirty-five years old, it could hold political office. Well, it wasn't long after that we elected our first corporate President. ExxonMobil, it was.

It didn’t take too long for folks to figure out that the old parties had stopped making sense any more. The Dems were the first to shutter their offices, but the GOP followed suit just a few years after. No point having political parties in a corpocracy. The corps fed us our news, made sure we had food, allocated our medical care, and decided which wars we needed to fight. Good times.

No, really. It was good times. Anything would have been better than the mid-teens, when the Western-Islam wars started. Only good thing you could say about the Pence-Huckabee Crusades was that they helped take our minds off the world economic collapse. Seems that nobody in the Trump administration remembered Hawley-Smoot from 1930. Jacking up tariffs and starting trade wars is like throwing gasoline on a burning dumpster of an economy, and things had already gone south after the Haircut Act.

Everyone remembers the Haircut, I guess. The Cheeto Jesus boys must’ve thought it would be a great idea to renegotiate interest on our national debt. But a sovereign nation’s obligations are a touch more serious than corporate bonds. China practically shit their collective pants, on account of they held so much of our paper. When they eighty-sixed their dollar holdings, the whole damn thing tanked. It was like the world was a great big casino, and ol’ Don knew how to run those... right into the ground. When the Dow dropped below 2,700, there were a whole lot of unhappy people. Donnie Boy and his crew ended up getting it in the neck - the scene in the Trump Tower bunker was right outta May 1945, I hear.

Thank PopeCo the wars ended when we elected ExxonMobil. Peace with the Arabs (and the Iranians, and the Turks) was the only way they could keep the oil flowing. Ceding most of Europe to the Caliphate wasn’t too high a price to pay, and the economy started to come back.

And now that the Starbucks administration has been running things, we have plenty of coffee to drink and muffintops to eat. No, those aren’t raisins, do you think I’m a department head? Roach-nuggets. Lotsa protein, and they’re crunchy.

Now it’s election time. McDonald’s is running (again!), and Facebook is mounting yet another third-party campaign, but I think I’m gonna stick with the Mermaid. We’ve had it pretty good for the last few years... you would be amazed at how hard people can work when they’re jacked up on Flat Whites and mochaccinos.

So keep your literature for the next fellow: You don’t need to convince me. Yeah, I’m a Starby guy. Good times, right?

Funny and depressing. But the Corporatization of Everything is coming.